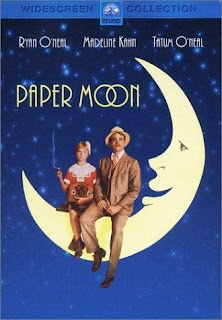 Bogdanovich's skills as a director lies partly in his ability to marry 1970s filmmaking with his love of Hollywood Golden Age movies. I loved this combination in his film What's Up, Doc?, and similarly enjoyed it here in Paper Moon.

Casting real father-daughter duo of Ryan and Tatum O'Neal works beautifully in Bogdanovich's film. The story, and much of the two characters' dialogue rests on Moses Prey (Ryan)'s resemblance to Tatum's Addie, despite his protestations that it is impossible that they are father and daughter. We never find out for certain if this is the case; instead the focus is on how the two come to rely on each other, and Addie's attempts to keep them together - excluding all others.

The cinematography is lovely. The black-and-white look of the film adds a starkness to the already dreary world of the Depression-era South, and there are lots of wide shots of the empty plains of Kansas and Missouri, or empty, decaying towns.

Tatum O'Neal won the Best Supporting Actress award for playing Addie, and she is very good (though she is really the main character!). Addie is tough, standing up for herself early on, demanding Moses give her the $200 he swindled out of Addie's mother's killer's brother. The easy chemistry between the two O'Neals is fun to watch, particularly as they bicker together.

I really liked this. It paints the Depression as an era that encouraged invention in many of its citizens, often in criminal ways, in order to make money. In the end, the money is less important than having someone around who cares about you, but the film never dips into sentimentality, just letting this idea gentle come through.
Posted by Julia Mac at 00:54