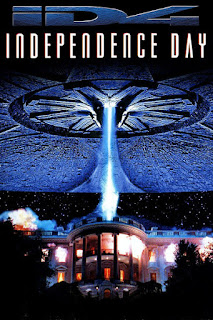 I vaguely remember this film being released, but was too young to see it at the cinema. I believe it was played a few times at school, but I don't remember watching it. If this film holds any significance today, it is as a barometer for how much blockbusters have changed in the last two decades. Other than that, I can't think why it is considered a must-see film.

The film is incredibly stupid in so many ways it is impossible to go through them; perhaps the most glaring is the use of the internet to download a virus onto the alien aircraft using Earth internet, but several thousand kilometres away from Earth (what the hell!!). None of the characters have much character development: the president is suitably bland - we get no sense of his political persuasion, only that he is thought to be too young for the job. One woman is shown to work as a pole-dancer, for no reason other than that's something male screenwriters seem to think is a big employer of women (tagent: I'd love to do a survey of all the jobs women are depicted having in films: I bet sex worker and stripper would be disproportionately high compared to actual jobs women have in real life). The disparate characters all eventually and predictably end up meeting and working together. And, of course, America saves the day.

While the film's visual effects have aged, I don't really have a problem as this happens to pretty much every film. And 22 years later they don't look that bad; other films have fared less well. However, the overwhelming Americaness of the whole endeavour (it just happens to be set around America's Independence day) just put me off. Apparently the rest of the world was just along for the ride.

Compared to the recent Arrival, Independence Day looks immensely stupid and violence heavy. If it shows any thought, it is in the rather pessimistic way it depicts conquering forces as destructive. But even this is giving the film too much credit. Its stupid, shallow and ultimately unsatisfying.
Posted by Julia Mac at 05:34 6 comments: 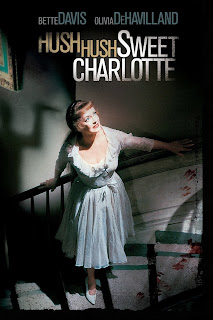 Aldrich's film was originally intended to star both Bette Davis and Joan Crawford, replicating the success of the three's previous film What Ever Happened to Baby Jane?. But the ongoing feud between the two made it impossible for them to contemplate being in the same room together (with some undermining by Davis with the crew) Olivia de Havilland was cast as the titular Charlotte's cousin Miriam.

The original idea behind the casting of Davis and Crawford was to switch the dynamics of Baby Jane, with Davis now playing the put-upon character, and Crawford as the scheming one driving the other insane. While it would have been interesting to watch that play out, de Havilland is really good as the evil Miriam. She is playing a little against type herself; many of her most famous roles involved being the gir-next-door, though they often had dark parts to their lives (particularly in The Snake Pit). Here she gets to be out-and-out bad, and seems to be relishing it.

While Davis is famous for playing "bitchy" characters, she also brought great vulnerability to many of her roles. While Charlotte is not one of her subtlest performances, she is a good fit for a character who people believe murdered her lover.

It is not as hammy and grotesque as Baby Jane, making it less memorable and not as great. That being said, there is much enjoyment to be had watching these older stars of Hollywood flex their acting muscles.
Posted by Julia Mac at 04:38 No comments: