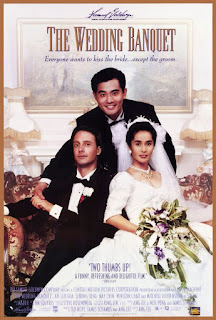 With The Wedding Banquet I have finally cracked 2,000 films watched in my lifetime. Thankfully this was a lovely film with which to achieve this milestone. I have enjoyed pretty much all of Ang Lee's films, and the progressive message about love and family at the heart of this one still feels relevant 25 years later.

Wai-Tung Gao is a Taiwanese man living in New York with his partner Simon. After receiving continuous pressure from his parents back in Taiwan to marry (particularly after his father suffers a stroke), Wai-Tung and Simon decide Wai should just marry a girl to get his parents off his back. Luckily one of Wai's tenants, Wei-Wei, needs a green card, so the three plan the wedding. But then Wai-Tung's parents arrive in America to see the wedding, forcing the celebrations to be bigger, putting pressure on Wai-Tung and Simon's relationship, and making Wei-Wei feel the separation from her family.

There is a generosity at the heart of the film. While some elements might have aged, as gay people have become more accepted in mainstream society, overall the film is still very sweet and touching. The cross-cultural element is something we in 2018 are dealing with as migration occurs. The Wedding Banquet shares similar ideas with My Big Fat Greek Wedding and more recently The Big Sick. Such romantic-comedies are not only about people finding someone to love, but also finding a balance between Western individualism and the more collective cultural philosophies of the East and Middle East. This adds more meat to the story and raises the stakes, creating a satisfying mix that goes beyond simple boy-meets-girl stories, and portrays the messiness of romantic life. The Wedding Banquet also has the added element of homosexuality, making the choice facing Wai-Tung even starker.

As a fan of the romantic-comedy genre, as well as someone who likes to explore other countries and cultures through film, I hope that future romantic-comedies continue to engage with such themes. To use a horrible word, such themes are more "relevant" than ever, and in a world that appears to be becoming more isolationist, surely focusing on love and relationships crossing divides is a good way to bridge gaps and generate understanding. 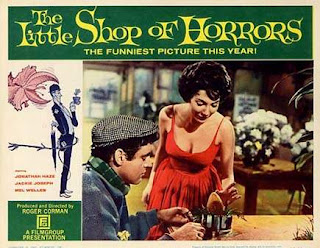 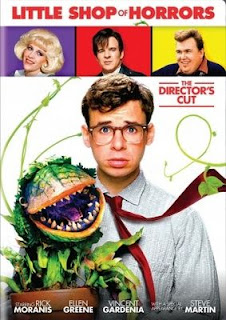 Of all the films to be give a musical makeover to, surely Little Shop of Horrors is the least obvious choice. The plot revolves around a nice guy, Seymour, forced to kill people to feed a carnivorous, talking plant named after the girl he loves (there is also a sadistic dentist thrown into the mix). If musicals have horror plots, they tend to be gothic (Sweeney Todd, Phantom of the Opera), but Little Shop is a horror-science-fiction-comedy, making it rather unique. Corman's original focuses on the destructive relationship Seymour has with Audrey Jr., while Oz's films ups the stakes, fleshing out Seymour and Audrey's romance, and giving Audrey II a rather sinister motive.

Frank Oz's film, which is based on the stage musical, is more polished by comparison, and it does develop the plot and some of the characters more than they were in Corman's film. Audrey is in a relationship with the sadistic dentist (played wonderfully by Steve Martin), who is abusing her, making Seymour's tenderness with her striking in comparison to what he does with Audrey II. The songs are brilliant, unsurprising as they were written by Alan Menken (who did the scores for many 80s and 90s Disney films). My particular favourite is "Dentist."

Of the two films I did enjoy the musical more, though I will note I did watch it first, making it the default despite being chronologically after (This is why I usually try to see remakes chronological, so I can see the development of ideas through the versions). Regarding the alternate ending to Oz's film, I honestly don't know which one I prefer. While I like the sweetness and romance of the theatrical version, the alternate is dark in a way most musicals are not. At least in this world of Blu-ray extras you can explore both.
Posted by Julia Mac at 05:14 No comments: 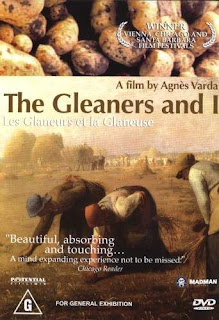 Last year in Australia a TV series called 'The War on Waste' aired, showing the amount of waste created by a country of 24 million people, including horrifying statistics about the number of perfectly good bananas thrown away (something like 30 million a year out of around the 50 million produced). Why? Because they fall outside the strict requirements of the supermarkets. A similar scenario happens in Varda's documentary, with a truck load of potatoes dumped in a field. But as Varda shows, there are people who make use of these oddly shaped, discarded food.

Gleaning is an incredibly old practice where people collect items discarded by others. In the Bible Ruth gleans wheat from the fields of Boaz; poor people in 18th century England gleaned food from the hedgerows; a modern day equivalent is dumpster divers retrieving perfectly find food from shop bins. Varda's film focuses on many different people who practice gleaning in early 21st century France, exploring the many different reasons for doing so: poverty is one common reason, but not the only one.

The film approaches it topic with curiosity and appreciation of people's desire to combat the wasteful results of consumerism. I could imagine this topic could be tackled again today in another documentary, especially considering the expansion of the world's population (1.5 billion more people today than in 2000).

Varda is a wonderful companion on this exploration of gleaning. She lets her subjects speak for themselves, but also has reflective moments in the film where she speaks about recycled art she has seen, and even does a little gleaning herself. It is great to know she is still going strong today.

Documentaries allow you to explore parts of life you didn't even know existed, and while I knew gleaning had once existed I hadn't considered its modern iterations. As long as we continue to throw out perfectly good food and technology, gleaning (and films about it) will always have a place in society.
Posted by Julia Mac at 04:52 2 comments: