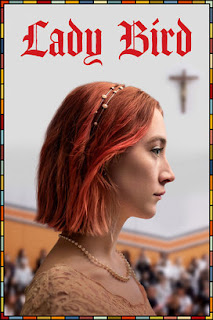 I could wax lyrical about all the wonderful things in Gerwig's Lady Bird. It is a small film in its scope and deals with a familiar topic - a teenager becoming an adult - but it does so in such a brilliant way, naturally using the specifics of its setting, and primarily focusing on the female relationships of its female protagonist, particularly the one with her mother.

While I don't require characters in films to "relatable" in order to care about their stories, a few aspects of Christine aka "Lady Bird"'s life echoed mine. I went to a Catholic high school (though I am not Catholic), and though I started the year after Lady Bird finishes in the film, the world of her high school felt very familiar. I went to friend's houses and was slightly shocked at the wealth they apparently had (my family is not poor, but we do not have a waterside view or gigantic house). A few people had mobile phones, but that was not the primary way we communicated; hanging out and talking face-to-face still happened. All this felt like a gentle reminder of how quickly the world, particularly the teenage world, has changed.

The relationship between Lady Bird and her mother Marion is suitably complex and treated beautifully by Gerwig. Neither is perfect, and while they both clearly love one another, we see them constantly say the wrong thing. Christine is oblivious to the financial realities of her family, while her mother can't help but emphasis the negative aspects of Christine's behaviour. Yet we also see Marion being good at her job, respected by patients and colleagues, and also see Lady Bird connect with other adults.

The role of Lady Bird is a hard one to get right, and I cannot imagine anyone else other than Ronan playing her. She is confident to the point of overbearing, yet also has moments of fear about being a better person. Over the film she starts to become this. Along with her mother, Lady Bird's other relationship of note is with her best friend, and its trajectory is very realistic, almost at times painfully so. Friends put up with a lot from each other, enduring absences when one gets a partner or decides to find other friends. But unlike Lady Bird's boyfriends, Julie is the one who knows her and loves her best.

As you can see I loved this. It captures something about growing-up and does so with an apparent lightness of touch, a lightness that belies the astuteness of its observations about teenage growing pains. Whether you are female or male (or somewhere in between), grew up on the 2000s or the 1960s (or somewhere in between) there is much joy and truth to be found in Gerwig's film. Can't wait to see what she makes next.