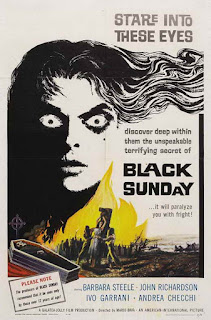 I like my horror films squishy, gooey and fleshy. I also like a bit of gothicness, either romantic or just purely horrifying. Watching Black Sunday, it didn't take long to realise I was going to thoroughly enjoy Bava's film. In the first scene, in 17th century Russia, we meet a crowd of shrouded figures condemning a young woman to death for witchcraft. Before being burned alive, the woman, Princess Asa, has the Mask of Satan - with large spikes on the inside - hammered into her face. It is a great start.

We then move 200 years ahead, and the Vajda family are still living under the shadow of their dead ancestor, especially Katia who bears a striking resemblance to Asa. When two doctors accidently awake Asa from her sleep, all hell threatens to break loose.

Gothic horror often has a campy quality to it. There is some of that in Bava's film, but because his horror goes further than the Hollywood horror films of the period, it never becomes ridiculous. The hammering of the mask is both over-the-top yet also truly gruesome. Princess Asa's regeneration is horribly imaginative. It just takes a drop of blood, and soon her skull is starting to cook up a new set of eyes for her, displacing the spiders that had lived inside her for centuries. The black and white cinematography helps contain the film's excess, as well as enhancing this world of shadows and ruins.

Some parts of the story are slightly confusing: Princess Asa is accused of being a witch, yet is referred to as a vampire as well, despite the lack of fangs (though this was a choice made on the set, as the fake teeth looked terrible on camera). As is often the case, the villians are more interesting than the 'good guys,' : the young naive doctor who takes a fancy to Katia is a bit wet for my taste. However, the film rests on Barbara Steele playing both Asa and Katia, and she is wonderful, giving a performance that distinguishes the two. Her Asa is vengeful and alluring, convincing Dr Kruvajan to give her his life essence, and even hoodwinking Dr Gorobec into thinking she is Katia for a while. Katia is a rather haunted young woman, her beauty acting as a curse.

Bava's film is both fun and horrifying, which is what I want from gothic horror. The end may seem happy, yet Bava leaves us with a sense of discomfort, as the 'modern' characters descend into the barbarity of their ancestors.
Posted by Julia Mac at 03:51 4 comments: 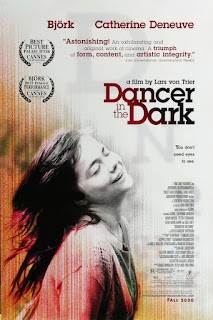 I've been on a bit of musical kick of late, sparked by La La Land. I've watched The Music Man, and rewatched Oklahoma and Kiss Me Kate, all standard (and fun) Hollywood musicals. Lars von Trier's musical is as different from these musicals as you can get. Deliberately so. Not in a way that condemns such fare, but instead looks at the impact a love of musicals can have on someone.

Bjork plays Selma, a musical-loving, am-dram singer who has migrated from Czechoslovakia with her son to America (nominally in the 1960s). She works in a factory and lives in a trailer on a wealthier couple's property. And Selma is going blind from a genetic condition. She keeps this, and her accumulation of money, from her friends, except from her landlord, Bill. This secrecy will prove to be a mistake, leading to a series of increasingly horrible events for Selma. Between these events, once Selma has gone completely blind, she begins to see and hear songs and dances in her head, like the musicals she loves so much.

This is a difficult film to like, but one that I found easy to admire. The documentary style of the "real life" parts - hand-held camera, natural lighting - are nicely contrasted with the musicals sequences. These are shot with multiple static cameras, and Bjork's voice gives them an appropriate dreamy quality. Bjork is great as Selma, not just in the singing, but also giving Selma a child-like quality and naivety. The rest of the cast is good too, especially the always wonderful Catherine Deneuve, a casting choice that recalls Jacque Demy's musicals.

My feelings about the plot changed as the film went on. So many hardships are laid upon Selma, some through her own stubbornness, that I occasionally thought von Trier had pushed the darkness of the story too far. Her self-sacrifice could have been avoided by trusting her friends. Yet by the end I understood Selma's actions, that she wasn't just reacting to the things that happened to her, but shaping them as well.

While many people think musicals all ended happily, this is certainly not always the case: Moulin Rouge has a romantically tragic ending, and The Umbrellas of Cherbourg is gently unromantic. Dancer in the Dark, however, goes beyond even Sweeney Todd in its brutality. Here is it emotional brutality, and its suddenness jars with you.

It is hard to say whether a non-musical loving would enjoy this more than a musical-loving one. And many film critics, who are musical-lovers, hated this film. In Australia, Margaret Pomeranz gave it five stars, while David Stratton awarded it none. Whatever it makes you feel, it is at least bound to make you feel something.
Posted by Julia Mac at 04:16 2 comments: 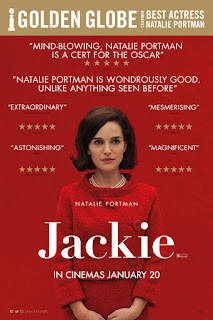 The assassination of JFK looms large over modern culture, with many returning to it again and again with a disbelief which manifests itself in all the conspiracy theories that surround the event. Larrain's film takes a different approach, centring us in the human story of the assassination: that on that day in Dallas, a woman and two children lost a husband and a father. The film also argues that history hung in the balance, and that Jackie was instrumental in creating the mythology around her husband's presidency.

Noah Oppenheim's script is very clever, moving backwards and forwards over what happened before and after the shooting, from Jackie's famous television special about the White House (or 'The People's House'), to the immediate aftermath, and JFK's funeral. The framing device, Jackie's interview with an unnamed journalist, allows us move around these events, following Jackie's reflections on this recent history.

Natalie Portman is absolutely fantastic as Jackie Kennedy. The film's success rests on the strength of the central performance, and Portman is never neither but compelling. Jackie was such an iconic figure, from her appearance down to her voice, that it would be easy to fall in parody. Instead, Portman gives Jackie a very human face. Her grief, pain and anger is real, and we get glimpses of a wry sense of humour. She is also portrayed as an intelligent student of history; it is she who decides to use Lincoln's funeral as a model for JFK.

The film's power has grown on me since I saw it. For something that has such a narrow focus, it delves deeply into the emotions of grief and loss. The film's score helps create the nightmare quality, with sliding, discordant strings on a black screen starting the story off. I loved the 16mm film Larrain used; it not only helped create the 1960s feel of the story, but its texture added to the rawness of the emotions on screen.
Posted by Julia Mac at 16:39 No comments: 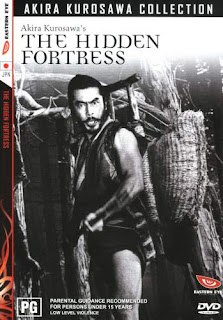 The Hidden Fortress will be familiar to some for being one of the inspirations for George Lucas' Star Wars. The plot of Kurosawa's film follows two hapless peasants caught up in a war between two clans. They manage to fall in with Makabe Roturota, a General with the Akizuki clan, who is taking the Princess Yuki (and other family members) to a safe territory. Along with the princess, there is a large portion of gold as well. While Lucas didn't take his plot verbatim from Kurosawa's film, the influence is very clear.

While not as great as Seven Samurai (but what is?), The Hidden Fortress is very enjoyable. Kurosawa regular Toshiro Mifune plays Roturota, a much straighter role than usual; his nobility and loyalty is contrasted to the two mercenary peasants. The princess does feel like a prototype Princess Leia - she is not afraid to give her opinion, even though she is acting as a mute. The two peasants provide much of the humour, and rather reminded me of Rosencrantz and Guildenstern in Hamlet.

Comparing Kurosawa's work across his filmography is an interesting exercise. On the surface the samurai films look like different beasts from his earlier dramas, which often focused around medical conditions. Yet throughout all his films, his deep interest in human beings is clear. It is even present in a film like The Hidden Fortress, which, while taking the audience on a rollickingly fun adventure, never forgets to populate the story with memorable characters.
Posted by Julia Mac at 23:41 2 comments: 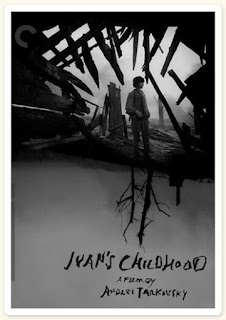 For such a small filmography, Tarkovsky managed to make all the films he made count. Of his eight full length films, four feature on the 1001+ list; the only reason I can account for Ivan's Childhood's absence is that the list is only meant to give you a taste of a director's output. The story follows a young boy called Ivan, during World War II in Russia. He has become involved in army work after the death of the rest of his family.

This was Tarkovsky's first full length film, and few director have emerged so wonderfully developed. The story is filled with flashbacks and dream sequences (and sometimes it is hard to tell the difference), yet they slip into the modern story well, enhancing the nightmarish quality of the setting. The cinematography is beautiful. The film is set in darkened rooms and swamps (and one memorable scene in a forest), and the black-and-white stock emphasises the dankness of war-torn Russia.

This is arguably Tarkovsky's most accessible film, with a setting and emotions that are understandable, and have been tackled in films before. Yet it also gives you a flavour of this daring director who interrogated the Soviet Union and Russia's past. As in other Tarkovsky films, characters are at the forefront, yet perhaps because Ivan is a child, his motivations are clearer to us. We find ourselves immersed in this very adult world through the perspective of a child who has seen horrible things, yet who also retains an innocent naivety about the power he has. The last scene of the film is a tragic reminder the lost childhoods of many children as a result of war, sadly something still relevant today.
Posted by Julia Mac at 15:14 No comments: