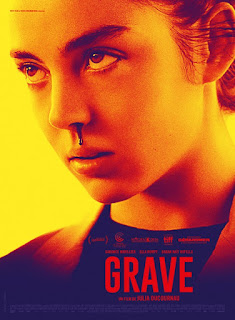 
I was surprised to find my local cinema playing Raw; as I've said before, rarely do foreign language films get played where I live, and arthouse horror films are also thin on the ground. With the positive reviews for the film, naturally I had to go see it, but it wasn't without some trepidation. While my horror film education has meant I now really enjoy the genre, and especially body horror, cannibalism leaves me feeling queasy.

There were one or two scenes that did make me feel a touch light-headed, but it was mostly from seeing dripping blood (which also sets me off in reality as well). Ducournau doesn't go for all out gore where human bodies are simply viewed as food. Instead Justine's appetite for human flesh is bound up in her coming-of-age and even her sexuality.

At the start of the film Justine is virginal and vegetarian, and Ducournau links these two ideas together. Justine's cravings for meat are matched by her interest in her gay roommate Adrien. Complicating things further is Justine's relationship with her older sister Alexia, who is also studying to be a vet like Justine. Alexia is Justine's only real friend apart from Adrien, but it is very uneasy, as Alexia is more outgoing, and she occasionally pushes Justine too far. She also has a secret like Justine.

Raw is clever and oddly funny, as well as unsettling and even shocking. I wasn't sure what I thought about it straight after seeing it, but the film has certainly grown on me. If you like your horror, definitely see this. If you don't like horror, do not see it; it is rather intense.
Posted by Julia Mac at 02:04 No comments: 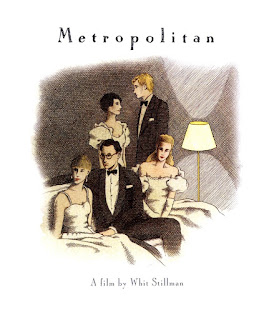 It would be very easy to dislike the young people who live in the world of Metropolitan. These college students, all from upper-class New York, spend their nights wearing immaculate clothes - white gowns with gloves for ladies, suits for the men - going to fancy places to dine, and engaging in all too clever conversation. Yet under this beautiful, old-fashioned facade, these young people are dealing with the same issues and emotions as others their age, including romance, jealousy, annoying parents, university, and friendship.

I ended up really enjoying the company of these well-dressed, articulate people, whose bluster masks their vulnerabilities. There is no great overaching plot, though Stillman has borrowed group dynamics from Jane Austen's novel Mansfield Park - another reason I loved this film. The main character Tom still has feelings for his ex- Serena, while Audrey, who loves Austen's work, develops a crush on Tom.

The screenplay is full of wonderful dialogue, including a hilarious scene where Tom explains to Audrey that he doesn't really read fiction, but does read criticism about, which he thinks gives him an even better idea about the text than if he actually read it. A poignant feeling develops as the film goes on, as the group known as the Sally Fowler Rat Pack, before so tight-nit, start to go their separate until only two are really left.

Stillman manages to make this story of fancy apartments and wordy characters cinematic, creating a world that very specific, yet doesn't have a stable place in history; the teens are preserving a something that may never have really existed. And this gives the film a depth other directors might have missed. It is comparable to John Hughes' films, with its sense of youthful ennui - just more snappily dressed.
Posted by Julia Mac at 06:40 No comments: 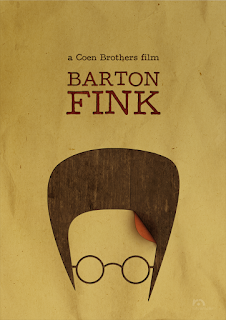 Barton Fink raises more questions than it answers. A playwright arrives in Hollywood with promises of glory and fortune, but finds himself blighted by writer's block. His hotel, The Earle, chosen to keep him honest, seems to ooze glue or wax from its walls; much like the sweat that pours off Barton's neighbour at The Earle, Charlie Meadows. Charlie seems to be a jovial, friendly man yet there is something off about him. Throw in an aloholic screenwriter, his female assistant, and a tranquil picture of a beach beauty gazing off into the distance, and you have one twisted tale of Hollywood non-success.

This would make a great companion piece with The Player, another story of amorality in Hollywood. The Coen brothers' film is much more cryptic; things are hinted at, like what's in Charlie's package (not a euphemism), what the significance of the beach picture is, and just what is the mysterious ooze. But nothing is concrete.

The acting is some of the best you will see in any film. John Tuturro makes Fink a nervous character who is not an innocent abroad, but is certainly in over his head. The two standout performances are Michael Lerner as Capitol Pictures head Jack Lipnick, and John Goodman as Charlie. Lerner talks at breakneck speed, with this veneer of largesse and openness, yet you are always aware that this could suddenly change if Fink says the wrong thing. Goodman is superb, saying more in his silences and listening looks than most actors do with many lines of dialogue. He could have been nominated along with Lerner for an acting award.

This is a great head-scratcher of a film, exposing Hollywood's seedy underbelly through mystery, much like Mulholland Dr. It defies genre, though there are trances of noir in its focus on the 'common man' against the machine of organisation, and horror, in the psychological implications of the The Earle hotel's portrayal. One of my favourite Coen Brothers' films.
Posted by Julia Mac at 06:08 2 comments: 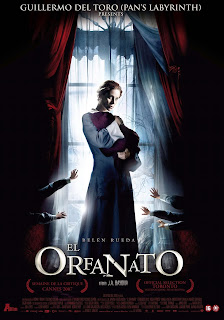 Gothic melancholy runs through the story of The Orphanage. Laura, as an adult, returns to the orphanage she attended as child before being adopted. She plans to re-open it as a home for disabled children, and one of the attendees will be her own child Simon. Simon is also adopted, and HIV positive, though he doesn't know about it. All of Laura's plans are put aside when the horrible history of this orphanage emerges, and Simon suddenly disappears.

It is hard to say anything about this film other than 'Go see it.' In a similar fashion to his friend del Toro's films, Bayona marries supernatural and real-world horror beautifully. The ghosts of the orphanage are unsettling with their cries for help, while Simon's disappearance is surely a parent's worst nightmare.The ghosts are also not evil, but are a link to Laura's past; something she must reconcile with her present. The ending is a shocking and deeply sad twist which I didn't see coming, yet makes complete sense, and is likely to prompt a second viewing.

The acting is great across the board, particularly Belen Rueda as Laura. It is also a joy to see Geraldine Chapin as the medium Aurora, who bears witness to the suffering souls still haunting the orphanage. I can't say much more other than thanks to SJHoneywell at 1001plus for pointing me towards this film; I would have seen it eventually, but his recommendation pushed it up the queue!