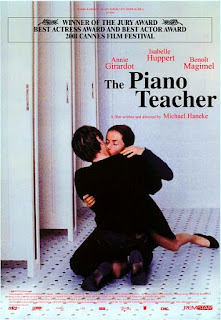 This film is not an enjoyable watch. It deals with an incredibly difficult character in Erika Kohut; the titular piano teacher whose oppressive relationship with her mother has ruined her ability to relate to anyone else. Her world is thrown into chaos when Walter Klemmer, a young musician, takes a romantic interest in her. Her previously hidden sexual proclivities, which are hardcore, come to the surface, as does her jealousy at others' musical skill. As I said, the unpleasantness of the characters makes this hard to watch, but I also couldn't helped being impressed by the film.

Most of that comes down to Isabelle Huppert's performance as Erika. The character is one of extremes, going from almost icy stillness to strong desire. Huppert shows us these changes with the smallest of gestures - sometimes it is just with the intensification of a stare. For the first part of the film she is largely cold, though you feel sympathy for her because of her overbearing mother. Then you discover her desire for hardcore sex, and feel slightly repulsed. I was hoping that her relationship with Walter would be a positive thing, but it being a Haneke film, Erika's vulnerability is rewarded with yet more pain and humiliation.

The hardest part of watching this was the violence that lurks in several scenes, the worst for me being the self-mutilation scene. If you've seen it, you will understand why I felt light-headed and crossed my legs, recoiling at what I saw. Even thinking of it now makes me queasy.

I didn't 'like' this per se, but I couldn't help but admire Huppert's skill, and Haneke's overall direction. The flatness of the light throughout the whole drains the colour from this world of competition and repression. The passion and beauty of the music played throughout is made ironic by Erika's own particular passions, which are not beautiful, nor is her understanding of human relationships. This is one of those films I would not recommend to everybody, or to most people, but if you think you can withstand the pain at its centre, it is worth watching.
Posted by Julia Mac at 06:02