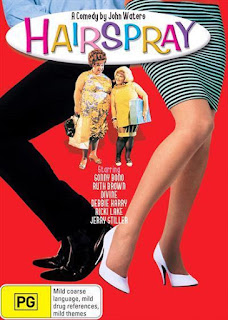 I love the 2007 musical version of this story, and was interested to see Waters' original vision. While certainly the most mainstream of his films, there is still something very subversive about the story, which revolves around a "pleasantly plump" teenager, Tracey, becoming famous and championing civil rights.

While not a musical per se - no one sings a whole number - the film is saturated with early 60s music, and there a number of scenes of dancing. This won me over, as I love a good dance sequence in a film. The pastel retro look, from the costumes to the sets of the Corny Collins Show, is great fun, as is the over-the-top hair styles. For a film with so little singing, Waters got a few big names from the music industry in his film. Watch out for Debbie Harry and Sonny Bono.

While the plot gets rather too ridiculous towards the end, I really enjoyed the nostalgic fun of the film - both for the 60s and the 80s. The film's message is still a pertinent one, and Tracy's whole-hearted joy at being herself still feels unusual all these years later. Sadly, the backwards views on race shared by some of the characters are still alive all these years later. This is a cult film, but it is one of the more happy, celebratory ones out there.
Posted by Julia Mac at 05:03