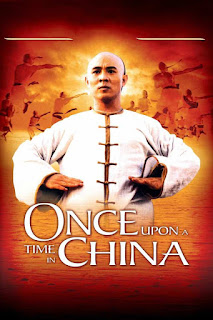 Foshan, the setting for Hark's film, is presented as an incredibly international city, at least was in the late 19th century. It is a giant melting-pot of various Asian and Western countries, including America and Britain. At the centre of this world is Wong Fei-hung, a martial arts teacher and healer, and his coterie of apprentices and his '13th Aunt,' related to him by marriage and the woman he secretly loves. Another talented martial arts fighter arrives in town with the theatre, Leung Foon, who also adores '13th Aunt.' Wong, despite wanting peace, finds himself fighting with local gangs who have dubious connections to Americans who run a human trafficking ring.

Really, the plot is simply there to facilitate the fight scenes, and there are enough of them to keep you interested, or from cringing at the acting of the 'Americans.' Jet Li is good as Wong, and his fight scenes are a joy to watch. I also liked his quiet romance with Rosamund Kwan's '13th Aunt.' The depiction of this uneasy multicultural city was interesting, though I didn't known the history behind each country's presence there.

I did enjoy watching this, but am slightly unsure why it is on the 1001+ list. I can only think it is because it sparked an interest in martial art films at the time. It is good fun, but lacking in depth regarding its characters.
Posted by Julia Mac at 04:51