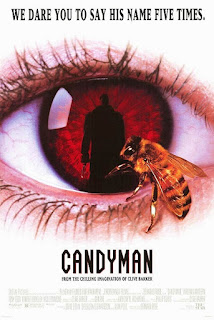 When it comes to horror, I am slightly ambivalent regarding slasher films. I don't need my horror films to have a great deal of plot, and don't mind a lot of gore, but I do like to care a little about the characters being ripped apart. Candyman, while nominally a slasher film, is full of plot and character, and also sets its story in unconventional settings - the academic world, and a housing project. It also focuses on the way horror legends work in culture, and even spares some time to touch on racism and the legacy of slavery. All this adds up to a clever and scary horror film that should be more well known.

Part of what makes this film horrifying is the way the plot wrong-foots you at several turns. It starts as a creepy murder mystery, as grad student Helen investigates the connection of the Candyman legend to some real-life murders in the projects. Then, just as we think we've solved the mystery, the film brings in the titular character and we are suddenly in a North By Northwest-style 'You've got the wrong person' plot, as Helen tries hard to prove she didn't commit murder, that Candyman is behind it all. At this point I was completely hooked, and could think of several ways the story could go - that maybe Helen did do it, or that someone else was framing her (looking at you, Rotten Husband!).

Virginia Madsen brings a maturity to Helen that contrasts with the hysterical teenager who usually leads these stories. She has a nice chemistry with Kasi Lemmons who plays Bernie, her best friend and colleague. It is great to see female friendship portrayed onscreen - it feels rare, sadly. Tony Todd is wonderfully imposing as Candyman; his height and voice leave a lasting impression as the spectre with a terrible past.

Candyman would make a great complementary piece to Jordan Peele's Get Out, another horror film that deals with racism and fractious relationships between black people and white people. While Rose's film is a complex story with several elements going on, it never loses focus, and it has a good amount of gore and blood - very important in a slasher film.
Posted by Julia Mac at 06:50