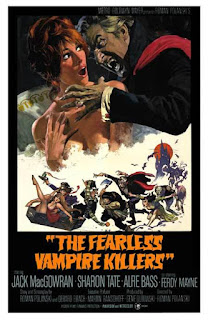 Polanski, as I've said before, is one of my favourite directors (in spite of his private life); Chinatown, Rosemary's Baby, Repulsion are some of the best films I have ever seen. The Fearless Vampire Killers, or Pardon Me, But Your Teeth are in My Neck is a very different prospect from Polanski: a comedy, and a broad one at that. Starring Polanski's future wife Sharon Tate, the film follows Polanski's Alfred and his mentor Professor Abronsius, two vampire killers, as they seek to save Tate's Sarah from the clutches of a Transylvanian vampire.

This is not Polanski most sophisticated work, and you wouldn't know from watching it that it was one of his films - except that he plays the main character. However I did enjoy this. It didn't raise much laughter, but I chuckled a few times, and liked the apparent levity of the story. Sadly I couldn't watch Tate and Polanski on screen together and not remember what happened just a few years later. Tate doesn't have a great deal to do in the film except be the object of desire, and take a number of baths, but she does get a great end scene. Polanski is good as the bumbling Alfred, and Jack MacGowran steals the show as the Professor.

This is a fun little horror comedy that shows Polanski's humorous side. It has less bite than you'd expect, and much more slapstick comedy than you'd imagine.
Posted by Julia Mac at 06:14