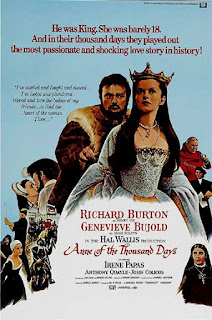 Being a fan of Elizabeth Taylor entails becoming a bit of a fan of Richard Burton; the two acted several times together, and Burton was of course talented in his own right, particularly playing rather grand characters. And they don't come much grander than Henry VIII. This film covers Henry's relationship with his second wife Anne Boleyn, the first 'beheaded' one, from their meeting to Anne's execution.

As a young teenager I was very interested in the history of Henry and his eight wives. I didn't think much about the character of Henry himself, but instead thought more about the feelings of his wives. Henry, as played by Burton, is a tantrum-prone tyrant, a man who believes all he does is fine by God, and can think of nothing else but producing a male heir for his kingdom. His attraction to the lively Anne is portrayed as a tragedy, with the two having a brief time of blissful love before reality sets in. Of course, the tragedy is entirely due to his obsession with having a son.

Burton is good as Henry, striding around shouting his wishes aloud - 'I want Anne!' or 'I want a son!' - or whispering loudly sweet nothings to Anne. It is a big performance, which does work as Henry was a big character. Genevieve Bujold is wonderful as Anne; she had my sympathies from the start, and she moves so naturally through the character's arc, from hatred and anger to love and wistfulness. She is intelligent and clever, navigating her way in this harsh world, trying to get the best for herself and her daughter.

While the script is full of talk about lust, sex, incest and adultery, onscreen it veers towards stuffy; it doesn't throw off its origins as a play. The costumes are gorgeous, opulent in their details - Margaret Furse thoroughly deserved her Oscar.

I've read somewhere that Burton had wanted Taylor to play Anne; I would have enjoyed seeing these two once again spar with one another on screen, but Bujold is so good in the role that I don't regret the casting for a moment. While not required viewing, it has several good performances and is lovely to look at - and watch out for Taylor's cameo!
Posted by Julia Mac at 05:43