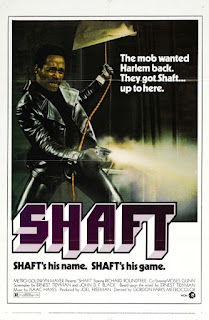 It is impossible to talk about Parks' film and not mention the theme song. It is the first thing you hear, played over the titles as we follow John Shaft walking around his patch of New York City. On its own, "Theme From Shaft" is a great song, sticking in your head for the whole film and long afterwards. Combined with the film's opening shots, it works as one of the best introductions to character you will see in film.

John Shaft is a private detective with an uneasy relationship with the police and several gang members. He is hired by Bumpy Jonas, a gangster, to find his kidnapped daughter. This gets complicated as several groups have their own agenda, including the police who want to know what Shaft knows, fearing this dispute might look like the start of a race war (which is it not).

Shaft is, as the song tells us, 'a complicated man.' He operates in a world that means his loyalties are not clear-cut - he doesn't want to get caught up with Jonas' gang, but is also weary of the police: a classic noir detective. His 'complications' also extend to his love life. The most dated part of the film are its sexual politics, as Shaft cheats on his girlfriend (thought the song assures us she is the only one who understands him!), and is described by one fling as "pretty good in the sack" but "pretty shitty afterwards.' This is just how Shaft is, the movie says, part of his "sex machine" persona. Despite this, Shaft is an incredibly charismatic individual, and you can't help but enjoy watching him take on this case.

Parks' decision to cast a black actor in the role of Shaft (the studio and writers had originally wanted a white actor), is one of the best decisions in film history; I can't imagine anyone else but Richard Roundtree playing the role - he is fantastic.

This was my first taste of blaxploitation cinema, and I look forward to seeing other films in the genre (the horror films look particularly intriguing!).
Posted by Julia Mac at 06:08