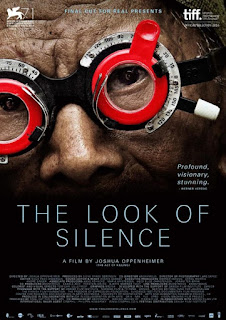 Despite Australia's geographical nearness to Indonesia, I known very little about the country's history. I even studied the language for a time in high school, but only picked up small details about modern life. This film is a sequel to Oppenheimer's 2012 The Act of Killing, which followed a group of men who carried out the killings of thousands of communist during the 1960s.. The Look of Silence is a film in conversation with its predecessor, focusing on the experience of a man whose older brother was killed in the 60s.

Much like The Act of Killing, this film offers harrowing details about these killings from the very mouths of the perpetrators. None of them express remorse for their actions, even when confronted with the pain of the family. The only person who seems upset is the daughter of one of the killers, and you can see how torn she is between hearing what her father has done, and trying to focus on the present.

The anonymous interviewer is shown in almost every scene of the film, but we never know his name. We get a good slice of his life with his elderly parents and his boisterous daughter. He uses the excuse of eye exams to interview his subjects (he is an optometrist). He proves to be a thoughtful, and brave, interviewer; he really wants these men and their families to face up to what they have done, and continues on despite the hostile reception he receives, even from a member of his own family.

As with Oppenheimer's first film on the subject, the accounts of the killings are hard to listen to, as is the denial of the killers, most of whom are still in positions of power. As the audience, you end up experiencing feelings of anger and despondency, as well as admiration for Anonymous and his family. The greatest achievement of these two films is their capacity to record and bring to light these awful crimes that risk being forgotten by history. What impact the film will have on the perpetrators - the people who need to heed the message the most - I fear it will be minimal.
Posted by Julia Mac at 00:14

Email ThisBlogThis!Share to TwitterShare to FacebookShare to Pinterest
Labels: Documentary