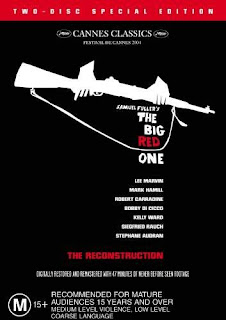 Trust Sam Fuller to make a war film that doesn't feel like other war films. Following a group of men from the 1st Division in World War II, we get an episodic view of war; the tension, the boredom, the unexpected, the comradery, and the fear. Lee Marvin is the oldest of the group, and saw action in the First World War. His experiences there affect his experiences in this war, and Fuller reflects on what we really learn from one war to the next.

Fuller does not shoot his war film like others. Instead of gloomy interiors of bombed-out houses, or battle-scarred, dark landscapes, we get sun-drenched North Africa, Sicily, Omaha Beach, and sunny West Germany. The opening scene in WWI, which was shot in black-and-white, and the final scene at night, are the really noticeable moments of darkness. The effect is to expose everything about war, and it leaves a lot of the emotions to the audience to feel, rather than the film using darkness to provoke fear.

The cast is full of well-known faces. Lee Marvin is great as the leader of the squad, a man still haunted by his previous experience. Mark Hamill plays a talented shooter who suffers a loss of confidence and becomes something of a pacifist (as much as you can be in the depths of war). Robert Carradine is the narrator of the film, and his character is apparently based on Fuller himself; the film's stories are based on Fuller's own experience in the war.

This is a nice change from the usual war films one watches. It has moments of humour, pathos, real tension - the Omaha beach scene is really wonderful, very well paced - and the ending is a great call-back to the opening scene. The film feels like a whole picture of war, and doesn't continually dwell on the pain and anguish of war. There are lots of films that focus on those experiences, but Fuller's viewpoint seems to rarely get portrayed.