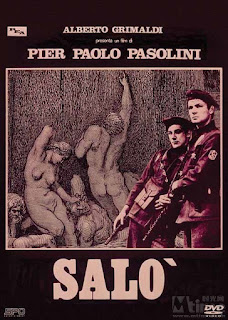 I finally subjected myself to this film. I had been putting it off, dreading its contents, but didn't want to get to the end of my journey through the 1001+ list and still have it left (oh the pain of being a list completist!). So I gulped, added it to my Quickflix list, and hoped it would come on a day when I was alone at home. That was today.

Like many countries around the world, Australia banned Pasolini's film for several decades after its release. Even now, it is only available if it comes with extensive special features which explain the context for the film, and stress that these horrible things were not real. It can't be shown in a cinema without them. I didn't watch these extras because I didn't want to spend anymore time with this film.

I have developed a taste for horror films lately, body horror especially. While this is classified as a horror film, with pretensions towards art, this is beyond horrifying, and is something I never, ever want to see again. The 'story' is an allegory for the ghastliness of fascism, how it objectifies and perverts people's treatment of one another, but instead of focusing on the gas chambers or tortures of war, we get a thorough list of the sexual proclivities of a group of fascist leaders and experienced prostitutes.

I really don't want to explain exactly what happens. It is so deplorably awful, and weirdly boring as well. The sexual activity is so joyless, and often filmed at a distance (a small mercy), that you sit there waiting for it to finish, while also wondering how much worse it can get. The girls get a rougher deal than the boys, some of whom seem to enjoy the attentions of these middle-aged men (though not all).

Tonino Delli Colli's cinematography is really the only thing I can praise about the film - and maybe the costumes the older women wear - but even then, the skill of the composition is thoroughly overridden by the disgusting things we see, and hear.

Well, its done. I never have to see it again, and unless you really, absolutely think you need to, you can give it a miss.
Posted by Julia Mac at 00:11