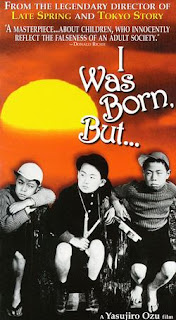 What a delightful film! I knew that Ozu's early work was rather different from his later films, which are wonderful and brilliant and all that, but rarely are they so sweet and funny as this. Perhaps its because I Was Born, But ... follows two young brothers and their problems fitting into a new school, and coming to a deeper understanding about the adult world; quite different from the sadness at the heart of Tokyo Story, but no less profound.

Keiji and Ryoichi have recently moved with their parents to a new suburb, one that happens to be close to their father's boss Iwasaki. The local kids, one of whom is Iwasaki's son, tease the newcomers, who decide to skip school to avoid trouble. Their father finds out, and tells them that they must go to school and stand up to the bullies. The two boys eventually do this, and everyone becomes friends, but things go awry when the boys discover that their father is seen as the office clown at work. The boys are distressed, argue with their father, and ponder the inequalities in the world.

From that synopsis you might think the film is weighty, but it really isn't. Instead, Ozu lets the boys' pain and anger simmer under the surface of the sweet humour. As a result, the film's profundity sneaks up on you. It is the behaviour of the two brothers that bring most of the humour. They have little quirks, like the funny game they introduce to their new friends, which looks like a variation on dead lions. One of the brothers also occasionally pulls a silly dance pose for no reason. Their interactions with one another are also very cute.

The politics of being a child are beautifully portrayed in this film, as is the earth-shattering discovery that your parents, who are the most important adults in your life, are usually less important in the world than you think they are. The film ends on a lovely note of hope for the future with an image that echoed the last in Chaplin's Modern Times. I really loved this, and unless you hate silent, black-and-white, and 'foreign' films, then you'll enjoy this too.
Posted by Julia Mac at 06:08