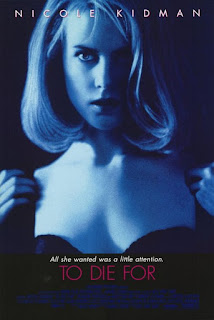 If you ever wonder why Nicole Kidman is held in such high esteem in the acting world, you need only watch this film. As Suzanne Stone/Maretto, Kidman gets to flex her comedic muscle as the ambitious, amoral wannabe TV star. She also gets to be nasty and cruel, and completely sells the rottenness at the heart of the American Dream.

The story begins at the end - with Suzanne suspected of her husband's murder, and the Stones and Marettos recounting the ill-fated marriage of their children. Throughout the film we get interjects from what appear to be interviews with Suzanne and Larry's parents and Larry's sister Janice, who mistrusts Suzanne from the start. We also get Suzanne's own recollects told directly to camera. Suzanne wants to be a TV star, so she gets a job at the local TV station as the weather girl, and pitches a documentary series about teenagers. She picks three from the local high school and starts manipulating them, using them to kill her husband.

As I said, Kidman is great as Suzanne, who is similar to Amy from Gone Girl and Lou Bloom in Nightcrawler. Like Lou, Suzanne believes whole-heartedly in the American Dream, and she learns everything she can about being a TV star. She is so determined that she even comtemplates murder to achieve her goals. The supporting cast are very good as well. Joaquin Phoenix and Casey Affleck play two of the high school students, and Matt Dillon plays Suzanne's husband.

The film is not laugh-out-loud funny but may provoke a few dark chuckles. I really liked the script and also the film's look; Kidman's costumes, all bright colours and sharp lines beautifully express her character. Gus Van Sant has been a bit hit-and-miss for me, but I liked his choices with this. He gets great performances from his actors, and his juxtaposing editing works well. This is a rewarding gem of a film, and a large part of that is because of Nicole Kidman.
Posted by Julia Mac at 06:10