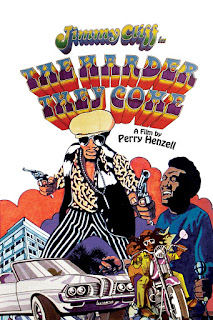 I am loving the free streaming service offered by my local free-to-air channel. It has over 900 films, and in keeping with the brief of its TV channel SBS, many are foreign language, cult or old (or all of the above). The Harder They Come was added recently, and after realsing it was on the 1001+ list and it only being available for a few weeks, I naturally watched it.

The film is ostensibly in English, but had subtitles as the characters speak sometimes in Jamaican Patois. I am glad it wasn't dubbed and preserved the sound of the speech. This film introduced the wider world to Reggae music, as well as giving it a glimpse of life in Jamaica. Though I know almost nothing about Reggae music, I really liked the songs featured in the film, particularly the title song sung by Jimmy Cliff. It and 'You Can Get It If You Really Want It'  play several times throughout the film, and several days later they keep floating through my head.

The story is not ground-breaking, dealing as it does with crime and the toughness of life lived in urban poverty. Cliff's Ivanhoe is a naive character from the country, hoping to find opportunity in Kingston. Other than kowtowing to a hard-minded priest or music producer, the only real place to make money is in the drug trade, but even this is rigged in favour of the guys at the top. Ivanhoe's dream to become famous happens in an unexpected way for him, as he becomes an outlaw with a hit record.

It is always great to see cinema from countries not known for their filmmaking. Cliff is a charismatic presence on screen, and the cast as a whole are very natural in their roles. The most memorable part, though, is the music.
Posted by Julia Mac at 03:15