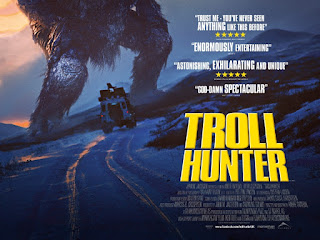 I mentioned in my Blair Witch write-up that that film reignited the found-footage technique for horror films. It clearly inspired Ovredal's Trollhunter. This film, like Blair Witch, follows a group of college-aged filmmakers as they are on the trail of a mysterious creature; Ovredal even starts the film by saying that the footage was anonymously given to the Norwegian film board, and the people featured in the film haven't been seen or heard from since.

The subject of the three students' documentary becomes Hans, a trollhunter who works for the Norwegian government, managing the secret troll population of Norway. The students are naturally sceptical at first, but a couple of nighttime encounters convince them otherwise.

The film is very clever, and while it plays its story straight, there are elements of humour amongst the thrills of being chased by trolls. What I know about trolls comes from fairytales and Tolkien's The Hobbit, and its the same for the young students. They ask Hans questions about the trolls, separating myth from reality, and discover a scientific reason behind why they explode or turn to stone when exposed to sunlight.

While the special effects are a bit ropey in places, the sound design is really good. I was entralled during the chase sequences, as well as a tense scene inside a troll lair in an abandoned mine. I also liked the shots of Norway's countryside, which is beautiful.

If you can get into this, there is much to enjoy. It builds upon the formula of Blair Witch, containing much more action and layers to its plot. Trollhunter also works so well because of Otto Jespersen's Hans, a wonderful character with surprising depth. He reflects on the awfulness of his work, and some of the horrors he has seen and had to commit.
Posted by Julia Mac at 20:45