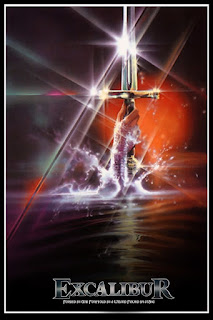 I guess the reason Boorman's film was recently shown on TV was to tie-in with the release of Guy Ritchie's King Arthur film. Despite not having seen Ritchie's version, only the trailer and reading reviews, I can't think of two more different approaches to Mallory's tale. Boorman's film greatly condenses the Morte d'Arthur, focusing on the rise and fall of Arthur's kingdom, through both the affair of Guenevere and Lancelot, and Morgana's treachery.

The most memorable part of the film is its look: its incredibly shiny! The knights' suits of armour, the clothes of the women (especially Guenevere's wedding dress), the castle of Camelot, and even Excalibur itself all shimmer and glow onscreen. This is not the dirty, dark medieval world we usually see, but one really of myth and imagination.

As a whole the film is uneven in places, and the theatrical acting doesn't help this. Helen Mirren is great Morgana, and Nicol Williamson is fierce as Merlin, but the others vary. The Lancelot/ Guenevere plotline is rather soppy, and is finished rather abruptly. The swiftness of the story makes it hard to get to know the characters, and they don't have great depth. While this is rather in keeping with the source material, where psychological explorations of character motivation was not the point, it doesn't make for a satisfying film.

This is a nice addition to the huge number of Arthurian imaginings, and it is visually stunning. But it is largely surface, doing nothing truly new with the well-known story, but also not being definitive either.
Posted by Julia Mac at 05:16