I've Just Seen: The Creature From the Black Lagoon (1954) 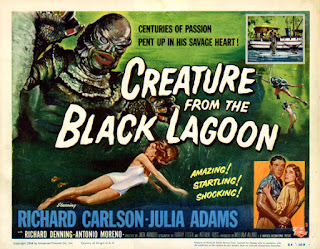 This horror-science-fiction monster movie about an aquatic gill-man who terrorises a group of scientists has aged since it was released. Parts of it are still interesting, but it is much less action packed than other 50s sci-fi films, and its plot isn't much more than an excuse for lots of underwater shots - particularly of a swimsuit clad woman.

The underwater shots, and the look of the gill-man are the reasons to see the film. The film was originally shot in 3D, and this would have been most effective in the underwater scenes. There is a dreamy quality to them, with the shimmering light coming from the surface, and the pockets of bubbles rising from the scuba gear of the characters. One shot has the bubbles dance into the camera, and it is great to look at. There are also shots looking up at Julie Adams' swimming silhouette that reminded me of Jaws.

Gill-man's costume is also impressive. We do see it in its entirety early on, but only get real close-ups of it later in the film. The fish-like head does look quite scary, though it doesn't have much movement or expression, beyond a stunned mullet look (which is appropriate). The science talk in the film is rather fun, especially the opening explanation of evolution, with its depiction of a pre-human world - all tempestuous water and mysterious mist!

I did enjoy this, but the slow pace, and the smallness of the story does lessen its horror, and its feels like it is straining to fill its eight minutes running time. I missed the melancholy of The Incredible Shrinking Man, or the darkness of Forbidden Planet. Still, its worth seeing.
Posted by Julia Mac at 21:25