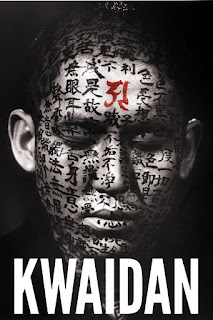 Kwaidan is described as a horror film, but it is not a jump-scare type of horror. Instead, Kobayashi's film goes for an eerie mood coupled with supernatural elements, and some of the best production design you will see in film. The almost three hour film is not one story, but four different folk tales, each featuring something ghostly or spectre-like.

The first, 'The Black Hair,' is about a samurai who regrets divorcing his first wife and marrying a rich, selfish second one. 'The Woman in the Snow' follows a young woodcutter whose life is spared by a snow spirit, and is charged to never mention their encounter. Later he falls in love with a young woman who resembles the spirit. The third and longest story, 'Hoichi the Earless' is about a blind monk, known for his storytelling abilities, particularly regarding The Tale of the Heike, who is employed by the ghosts of that story to perform for them. The last tale, and the shortest, 'In a Cup,' tells of a samurai who sees a man in his tea cup, and after drinking from the cup, is visited by the man's spirit.

The approach to the stories is slow, with some sequences having no dialogue for several minutes. It creates a dreamy quality to the film as a whole. The opening credits are interspersed with images of ink floating in water, adding to this dreaminess, and alluding to the folktale origin of the stories.

My favourite was 'The Woman in the Snow,' partly due to its amazing production design; the backdrops of the sets have eyes painted into the sky, which reminded me of Dali. The use of lighting was clever in this tale, the sharp blue of the winter contrasted nicely against the warm gold of summer.

While not to everyone's taste, I liked Kobayashi's film. Its stillness is only interrupted by violence and noise occasionally, but when that happens you really notice it. Unlike many European folktales which have been sanitised for modern children, these folktales are more mature, dealing with desire, sex, war and nasty punishment.
Posted by Julia Mac at 06:34