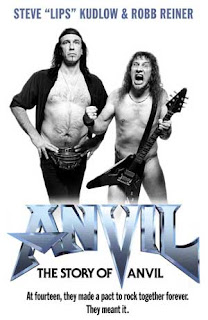 Who would have thought a documentary about an aging, Canadian, heavy mental band would be so emotional, touching and ultimately uplifting?

Anvil is one of the those bands that are well respected in the industry, but have never managed to break out into the mainstream. The film starts with footage of a concert in Japan in the 80s, where Anvil played along with other bands who, the titles tell us, went on to sell millions of albums. We also have a few clips of interviews with people like Slash and Lemmy, explaining the impact of the band's album Metal on Metal on their music.

Rarely do you get the stories of the bands that didn't make it, and the rather brutal honesty of the film is one of the reasons why it works so well. We see lead singer "Lips" Kudlow working as a delivery man for a food charity, while the drummer works in construction. Interviews with their family and friends reflect on the heartbreak the band has experienced, having given their all and receiving little reward. The first part of the film follows a disasterous tour of Europe, including a rather Spinal Tap moment of missing a train, and playing in large arenas to handfuls of people. All this is painful to watch, as you see the strain it puts on the band and their friendships. The second half has the band working towards releasing a new album, one that is produced by Chris Tsangarides, who also produced Metal on Metal.

There are several moments that are truly lovely and/or heartbreaking to watch. First is Kudlow's sister lending him money to go to England to make the record with Chris. Lips cries on his sister's shoulder, and you clearly see the love she has for her brother. The other moment is when Lips and drummer Robb Reiner make up after a big argument. Lips tells Reiner that though they fight, he loves him like a brother.

A good story will make you invest in ideas you are usually not interested in. I know almost nothing about metal music, but found myself completely engrossed in the band's fate, and hoped that they would suceed. The spectre of This is Spinal Tap hangs over this film, but where that film brilliantly sent up the ridiculous side of band life and the music industry, Anvil lovingly celebrates the passion people have for this music.
Posted by Julia Mac at 04:51