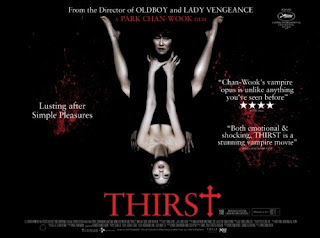 Thirst is a modern vampire film merged with the plot of Emile Zola's novel Therese Raquin. A Catholic priest in South Korea, Sang-hyun, becomes a vampire after becoming infected while volunteering in Africa. He returns to Korea and falls in love with the wife of a childhood friend. The two start an affair that threatens to kill everyone around them.

I really like Park Chan-wook as a director. He doesn't hold back in terms of violence and horror, and creates twisty plots that constantly challenge your expectations. Right from the start Thirst gives us a clever variation on the vampire story. Sang-hyun's infection is delivered through a blood transfusion, and actually saves his life (in a way). Park Chan-wook also focuses on character, and this particularly drives the plot of Thirst.

Sang-hyun, though he loses his faith after his 'conversion,' still maintains certain morals about his behaviour. He drinks from patients at the hospital who are on drips or steals bags of blood so he doesn't kill anyone. He is not above murdering his lover Tae-ju's husband, but does so believing him to be abusive. She on the other hand is much more bloodthirsty, despite not being a vampire for most of the film.

Thirst manages to be gothic and modern, harking back to nineteenth century literature, and stories of vampires, with some new ideas thrown in. It is sexy, gory and clever, even if the story lags at times during its long run time. There are several scenes of gore that stay with you; Sang-hyun haemorrhaging while playing his flute, to the oddly romantic yet gross way Sang-hyun saves Tae-ju's life. You certainly know you are watching a Park Chan-wook film.