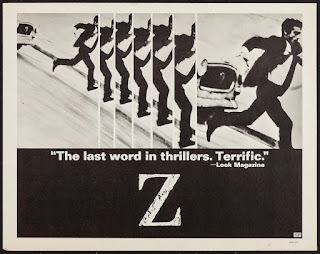 Use the word 'political' to describe a film these days, and most people are likely to turn off. This was not always the case, as many 60s films can attest. Z is a political thriller (not an oxymoron!) in the same vein as The Battle of Algiers, following the political fate of a country suffering under oppressive government rule. A leader of the peaceful leftist party is killed in drive-by accident, a set-up by the right-wing government, and a magistrate and journalist work to undercover the cover-up.

This doesn't sound thrilling on paper, but Costa-Gavras' film is both passionate in its politics, and very entertaining. Like Pontecorvo's film, Z doesn't have a specific protagonist but instead follows the fate of the unnamed nation as a whole. We know the truth from the start - that the government was deeply involved in the murder, making it an assassination -  and are whipped up into energetic frustration at the prospect of the government getting away with it (why does this sound so relevant?).

The screenplay is superb, as it introduces us to this politically charged world, and to the people who live in it, from the corrupt elite government officials, the weary opposition, the law and media trying to discover the truth, to the citizens with their diverse opinions and loyalties.

As you can tell, I really enjoyed this. It never talks down to its audience, trusting them to keep up with the story and the large cast of characters. The only reason you may not enjoy this film is if your politics is different to Costa-Gavras'; there is little doubt about his allegiances, though considering the recent history of Europe when the film was made (25 years since the end of WWII), it is not surprising.
Posted by Julia Mac at 05:33