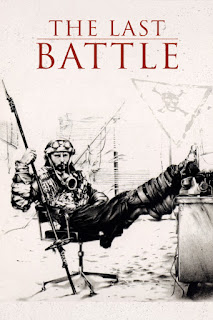 Besson's debut film is not strictly a silent film; it has a lot of sound and noise on its soundtrack, from whistling wind, to pelting rain, and clanging gates. But there is not dialogue, apart from one word -  'bonjour' - and the post-apocalyptic setting implies some sort of event has happened rendering humans speechless; the characters work very hard to say this one word. The black-and-white cinematography gives this science-fiction story a timeless quality: it is set in the future, but also harks back to early cinema.

The story follows 'The Man' around this desolate world of urban ruin and environmental bleakness. The first we see of him is having sex with a blow-up doll in a dilapidated apartment, the first of many striking images in this film. He leaves this place after some unknown men pursue him, flying in a handmade aircraft. The Man eventually meets with 'The Doctor,' a man living a another town, who has a secret that another man, 'The Brute' (played by Besson regular Jean Reno), is trying to get at. The Doctor fixes The Man after he crashes, and eventually reveals his secret to him. In the final third of the film The Man and The Brute battle over this secret.

As I said, this film has several interesting images in it. The most startling is the scene of fish falling along with rain on the town, and The Man gleefully gathering them up in a giant pile. Later pieces of rock fall like rain on The Man and The Doctor. The Man's first "home" is an old office block and he sits at a desk, still with some paraphernalia on it, but instead of carpet there is sand on the ground. We never learn what has happened, yet we know that it is something cataclysmic.

I was really impressed by this film, particularly knowing it was a debut feature. Besson has become well known for weird, brightly coloured and fast-paced science-fiction, so watching where he started off is very interesting. We are given few answers as to why the world has been all but destroyed, and instead experience the brutal level of survival the characters are living.
Posted by Julia Mac at 05:04