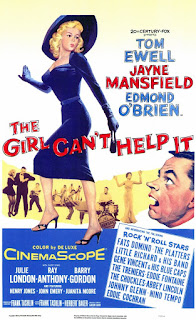 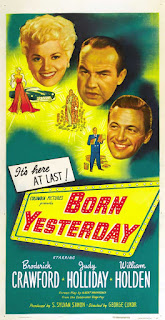 I've grouped these two films together because they essentially share the same plot: a gangster hires a professional man to help educate his blonde girlfriend, and the teacher and student fall in love. In Born Yesterday Judy Holliday is the blonde Billie, with William Holden as journalist Paul Verrall, while Tom Ewell and Jayne Mansfield are Tom Miller and Jerri Jordan in The Girl Can't Help It. In the first, Harry Brock wants Verrall to educate Billie as she embarrasses him in front of potential business partners; in Tashlin's film Miller is hired to make Jerri a star in order to reinstate Fats Murdock's reputation as a 'somebody' gangster.

In terms of the love stories of each film, Born Yesterday does a better job of convincing you that Billie and Paul are attracted to each other. The chemistry between Holden and Holliday is allowed to develop, and they get a number of scenes to talk to one another. The Girl Can't Help It tells us a great deal about Jerri's life, but Miller doesn't reveal much about himself: his attraction appears to be largely for surface reasons. The script for Born Yesterday is much better; it was based on a play after all!

That being said, there is much to enjoy in The Girl Can't Help It. As the first rock 'n' roll musical it has a fantastic soundtrack; Fats Domino and Little Richard feature among others. Jayne Mansfield made a career of being a Marilyn Monroe-type (or exaggeration), but she is a great screen presence. I couldn't help but be slightly mesmerised by her body shape: how did she get her waist that small! She is also a pretty good singer.

Judy Holliday as Billie won the Oscar for Best Actress in the same year that Anne Baxter and Bette Davis were nominated for All About Eve, and Gloria Swanson for Sunset Boulevard. All I can say is that this is further proof that the Oscars are meaningless. All of those women gave such wonderful, and different performances, and Holliday thoroughly deserved to be named among them. She is clearly having fun playing brassy Billie but also gives her depth; she responds well to Paul's teaching, and shows a sweet if sad backstory for the character.

I like Born Yesterday more than The Girl Can't Help It, but both are very enjoyable. While they seem to trade off on the 'dumb blonde' stereotype, both also play around with it in interesting ways.
Posted by Julia Mac at 06:14