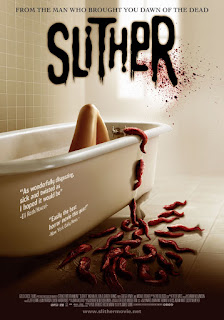 I watched this on the recommendation of fellow blogger SJHoneywell; we share a similar taste in horror films, a trend which continues with Slither. Comedy-horror can be difficult to pull off, but Slither is both hilarious and horrifying, and often at the same time. It also cleverly references other horror films, but without being derivative or lazy.

We are introduced to the town of Wheelsy, a typical mid-America small town which is visited by an Invasion of the Body Snatchers' style parasite which infects local car dealer Grant Grant (played by the brilliant Michael Rooker, reminding me of his role as serial killer Henry). Soon the alien life is changing Grant, making him hungry for meat and growing long tentacles. His younger wife Starla is suspicious and enlists the help of policeman Bill (who has a crush on Starla). The plot follows the usual trajectory for these type of films, but has fun playing with the audience along the way.

As I said, this gets the balance between funny and frightening pretty much perfect. The comedy comes through the interactions of the characters and their bemusement at what is going on. The horror is genuinely gross at times. The scene where Brenda, used by alien-infected Bill as his human womb, bursts open, releasing millions of these parasites into Wheelsy. The bath scene, made iconic from its inclusion on the poster, is also memorable, and cleverly moves the plot along as well. Grant's final transformation, as the primary organisism that the infected seek to absorb themselves into (with orgasmic joy) makes you laugh out of revulsion as well as humour.

I don't know why this film was poorly received by audiences in 2006, despite critical approval. Watching it now, the special effects haven't aged that badly, the writing is sharp, and many of the stars have gone on to become even more famous in recent years. Unless you hate gooey, slimy, even silly horror, there is so much to enjoy here.
Posted by Julia Mac at 20:47