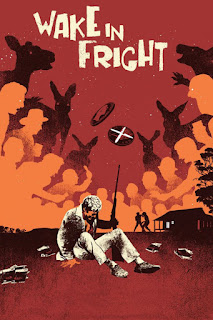 So many Australian films set in the outback have an aura of horror around them. There is no supernatural creature in Wake in Fright, with the horror instead comes from the aggressive friendship of the characters of Bundanyabba, who welcome city-raised teacher John Grant into their world of drinking, gambling, roo-hunting and fighting. Grant, well-educated with a suitcase full of books, waiting for a flight to Sydney to see his girlfriend, finds his whole person being completely pulled apart by this oppressive masculine world.


The view of Australia is from an outsider's perspective; we are looking at this culture through the eyes of John Grant, played by English actor Gary Bond, and the director is Canadian. The scenes in the RSL feel almost like a study of a foreign culture, from the bar etiquette to the sudden silence during the Ode. As someone who has grown up in this culture (or parts of it, I don't live in the outback) this makes for interesting viewing. When the film came out in the 70s many Australians found the film hard to stomach: it doesn't paint us in a great light!

There are many memorable scenes in the film, from the aforementioned RSL, to the two-up game, and the rather harrowing kangaroo hunt that takes place over a whole day and night. Throughout all the scenes there is an underlying menace from the locals, particularly from policeman Jock Crawford, and Doc, played by Donald Pleasance, who has a tendency to stare at one too long, and stand too close as he speaks to you. The nightmarish quality to John's experience also comes out in his inability to escape the town: he loses all his money in two-up, so no plane journery, and even a hitch-hiking attempt takes him back to the Yabba.

While not displaying Australia at its best, this is one of the great films about the Australian outback, and how alienating life can be living in the middle of nowhere. It is a horror film about the nasty side of mateship, turning the ideals of the Anzac spirit on its head, and asks Australians to think about just how friendly we really are.
Posted by Julia Mac at 17:54