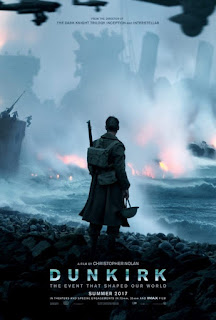 Dunkirk, as an event, seems to occupy a similar space in British history that Gallipoli does in Australia. It is used as an example of national character, where the country's defining characteristics were displayed not through victory in battle, but in its determination to keep on going, despite the odds. This is certainly the approach Nolan takes in his film.

While I have liked Nolan's films in the past, and cannot say anything against the look of his films, I haven't been entirely convinced by his storytelling. I feel that sometimes he relies too heavily on exposition to propel his twisty plots. While the dialogue in Dunkirk is not earth-shatteringly great, and is arguably the weakest part of the film, Nolan doesn't lean on it. Instead, the actors are often left to simply act with their faces, letting us see or wonder at their feelings. The story is really well-structured, as we jump between three different stories - land, sea, and air, over one week, one day and one hour respectively. The three gradually converge as the move to get over the Channel becomes more desperate.

The film looks wonderful largely due to Nolan's use of film stock. The blue of the water almost pops out of the screen in some scenes, and the lack of digital manipulation makes the air battles in particular look and feel real. The sound design and the music are what really brings the whole thing together. The roar of the Spitfires' engines vibrates in your body (with the help of the cinema's sound system), as does Hans Zimmer's score, with its clock-ticking motif and very emotive use of Elgar's Nimrod, a beautiful, stirring piece of music.

I am really glad I went and saw this on the big screen, and wish there was an IMAX cinema near me. While the film would be impressive on a TV screen, you wouldn't get that immersive quality that the big screen gives you. The loudness of the sound was a good thing, particular as the people sitting next to me saw fit to read out the words on the screen, and talk throughout (argh!); it was so loud that I mostly couldn't hear them.
Posted by Julia Mac at 06:30