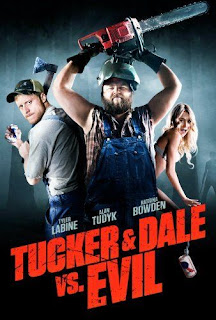 Well, its three from three for SJHoneywell's horror recommendations. A mixture of parody and homage, as well as a subverting of the stereotypes of horror films, how could I not enjoy Tucker & Dale vs. Evil!

Like The Cabin in the Woods, Craig's film plays on the horror staple of a group of college students going on a trip into the woods, and a rather eerie cabin with references to previous owner's violence. However, the owners of the cabin are Tucker and Dale, two hillbillies with pure intentions for their weekend getaway: fishing and clear-up of the cabin. The college students take against them after an awkward (and hilarious) encounter at the local petrol station, and it gets even worse when one of them, Allison, ends up unconscious in Tucker and Dale's cabin.

The deaths in this film are both gruesome and hilarious, all of them accidents that incriminate Tucker and Dale. The woodchipper scene was a highlight, its slapstick a more violent type of Buster Keaton sketch. The relationship that develops between Dale and Allison is sweetly handled, and nicely draws out more of their characters than one usually gets in a horror film.

This really works if you love horror, and have seen enough horror-in-the woods American horror films to get all the references. I also like that its skewers stereotypes about its characters: that the attractive, 'educated' characters may actually be the "evil" ones, not the supposedly creepy country folk.
Posted by Julia Mac at 05:43