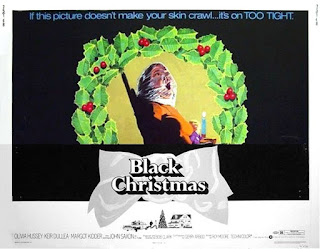 Black Christmas has one of the best ending for a horror film I have seen. Without giving too much away, it leaves the viewer with a deep sense of unease, wondering what on earth is going to happen next, and slightly shocked that the film managed to trick us into imagining a different ending.

The film is set in a Canadian sorority house just before everyone leaves for Christmas. The sorority has been receiving creepy phone calls from a rather disturbed male caller; we assume it is from the same person we saw climb into the house in the film's opening scene. Our main character is Jess, who is dealing with a grumpy boyfriend, and her unwanted pregnancy to said boyfriend. Margot Kidder is a fellower sorority sister, and the whole group are overseen by housemother Mrs Mac (who is more loose than some of the girls, with her stores of booze hidden around the house). After one of the girls, Clare, disappears, a search starts around the university, until other girls start to disappear: and the phone calls get more and more violent.

The start of the film is a little slow, but it gets more and more tense as it goes on, leading to its brilliant ending. The editing in the slasher scenes is nicely jarring, emoting violent rather than showing it. The first-person camera work used for the killer is effective in its creepiness, as the man sneeks around the house, glimpsing future victims as they wander around. The film's famous image of the girl suffocated in a rocking chair occurs early on, and is used throughout the film to show how close, yet how far the women and police are to solving this case.

I really liked this. It is just as much a psychological horror story as a slasher film, doing what Hitchcock describes as suspense: the killer is the "bomb" in the story, and we wait anxiously, hoping someone discovers him before he "goes off" (kills) again (and so we can find out who it is).
Posted by Julia Mac at 04:50