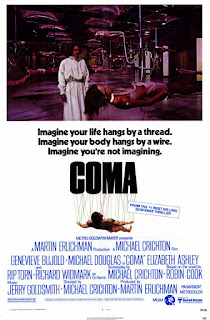 Coma is not strictly a horror film, but its subject matter - patients being left braindead after routine operations - plays on common fears about medical procedures, and questions our complete reliance on doctors to always do the right thing. Genevieve Bujold's Dr Susan Wheeler starts investigating these supposedly random events and uncovers something sinister.

This is the third film starring Bujold I have watched, and she is a good here as she was in Anne of the Thousand Days and Dead Ringers. She radiants intelligence, and her doggedness in pursuing these irregularities is not painted as a caring, female quality, but a rigorous desire for the truth. The studio apparently had thought about casting a male in the lead (Paul Newman), but part of the tension of the story comes from Susan's gender. The senior male staff ignore her findings, and even her partner, fellow doctor Mark Bellows (Michael Douglas) complains about her working too hard, and wants a more traditional relationship.

This is a neat little thriller film that engages with medical ethics in a clever way. While it gets a little melodramatic in the final third, Genevieve Bujold is also a joy to watch.
Posted by Julia Mac at 05:36