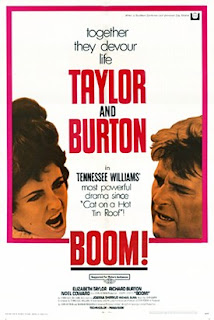 The things one does for love! I love Elizabeth Taylor and am trying to watch all of her films. Not all of them are available in Australia, but one of those that is is Boom!, which is about ...

Honestly, I don't know. This film is so bad, and part of that badness is the terrible handling of the story. Taylor plays a dying "old' woman who is meant to be seduced by a "youthful" fortune hunter, played by Richard Burton, infamous for being around wealthy old women when they die. For some reason it all happens in a modern house perched precariously on a cliff on the Mediterranean. Stuff happens, often with Taylor wearing rather elaborate costumes (the best part of the film: they do look great on Taylor).

This film has apparently got camp value, and Taylor's performance is rather over the top: Burton doesn't seem to be even trying. None of it makes sense, and I was rendered bored by the whole thing. Burton and Taylor could be dynamite on screen, but here the chemistry is missing: they look like they weren't speaking to each off screen for the whole shoot.

Really, you don't need to see this, unless you share similar taste in films to John Waters, who loves this.
Posted by Julia Mac at 05:26