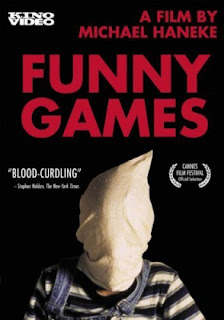 Most horror films deal with some sort of supernatural idea, be it monsters or spirits. Or if it is a human character, they are painted as monster-like themselves, and we usually get some kind of explanation for their behaviour. What makes Funny Games one of the most terrifying films I have seen is that the "evil" of the film is unexplained, and it is dealt by two young men who seem, on the surface, pleasant and even helpful.

Haneke's film falls into the category of admirable but not enjoyable. It is hard not to admire it. Haneke uses extremely lengthy shots to allow the story to unfold in a slow-burn way that ratchets up the tension. Two in particular really standout: the first is the one where the mother Anna is trying to give Peter some eggs, which he breaks, then ruins her phone, then drops some more eggs. What starts out as slightly comic becomes threatening, and you start thinking "Get him out of the house." The second one comes right after a horrifying death, and holds on Anna as she, and we, try to overcome our shock at what has happened.

The story is a clever one, defying our expectations, and even breaking film rules as a scene is re-wound to change its outcome. The central question of "why" regarding all the violence and horrible games is never answered, leaving us with little closure. All this is incredibly admirable, but is also used to deliberately make the film really unlikeable.

Like with Requiem For a Dream, I won't be watching this again anytime soon. I don't think I can take the tension all over again, especially knowing what is to come. Haneke's films are never easy or comfortable, but you will never forget them.