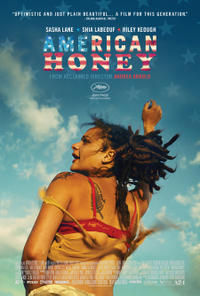 Arnold's film about Star, a young woman who joins a mag crew, is an American road movie that evokes other films in the genre - Malick's Badlands in particular - but also feels like a unique and fresh exploration of the subject.

The story and its running time made me a bit hesitant to watch it. I had never heard of mag crews before the film came out, and wondered how such a story warranted a two-and-three-quarter hours running time. Even the casting of Shia LaBeouf made me worried. But I should have trusted Arnold's talent as a filmmaker. The film is beguiling in its treatment of Star and the whole world of the crew. We get a small taste of her unhappy life, enough to understand why she would fall for the romance and adventure promised by LaBeouf's Jake. We watch as Star works to find her place in the group, though she always seems slightly aloof from everyone else (apart from Jake). Then the romance wears off, and the ugly side of life intrudes again.

Arnold often uses untrained, unknown people as her leading actors, and it works just as brilliantly here as it did in Fish Tank. Sasha Lane carries the whole film as Star - many shots are just close-ups on her face watching and subtly reacting to things  - and she more than holds her own against seasoned actors Shia LaBeouf and Riley Keough (both of whom are wonderful too).

Epic road movies are usually shot in widescreen, but Arnold shot American Honey in Academy Ratio (4:3), and it works beautifully. The focus is on faces and close-up details, like the small insect trapped in the car (rather than the view out of the window behind it). It also increases the space the sky takes up in the shots, particularly behind Star, as though she is floating in some sort of dreamy world. The colours look slightly saturated, with a warm glow diffused over many shots. Again, it is beautiful.

The score is also great at evoking this particular world of travel, with the mag crew often having sing-a-longs in their van. I didn't recognise any of the music, but it works to create the camaraderie of the crew: the singing of the titular song is a particularly lovely scene.

American Honey joins Fish Tank as my favourite Arnold film, and is one of the best road movies you will see. I never lost focus or interest throughout the whole running time, and when I had to pause it to do other things, I as anxious to get back and watch more. Always a sign of a great film.
Posted by Julia Mac at 04:40