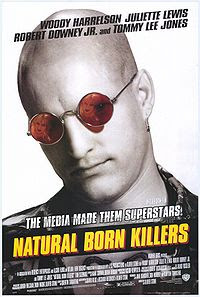 American road movies as a genre throw up something interesting films. Natural Born Killers must be one of the most violence and visually frenetic ones out there. It follows Mickey and Mallory Knox as they make their way violently around the American south, becoming famous for their deeds after being profiled on a TV show. They eventually end up in gaol, where their separation leads to an extremely violent climax.

This falls into the "admire but not necessarily enjoy" category of films for me. The story is divided into sections, each with its own distinctive look and feel. In the first, Stone cuts between black-and-white and colour cinematography, making us feel the scene is being observed by more than one audience. In the second section the story of Mickey and Mallory's meeting is portrayed like a sitcom, though the laughs come incongruously, usually reacting to the awful abuse Mallory receives from her father. In the final section in the prison, one scene is split between two groups, and Stone shoots one group on green, while cutting to the other group in colour. We are constantly reminded that everything is a spectacle, that what we are watching is artificial.

The performances are very good across the board. Woody Harrelson and Juliette Lewis have great chemistry together, and are truly terrifying as they go about their killings. Tom Sizemore is just as horrifying as Detective Jack Scagnetti, who enjoys killing as much as the Knoxs. Robert Downey Jr. is suitably oily as Wayne Gale, the TV reporter, and Tommy Lee Jones, who is great in everything, is on form too.

As I said before I admired this more than I enjoyed it. Its relentless violence is too much for me. The film is meant to be satirical, and pokes at the audience's enjoyment of the extreme action. While Tarantino only had a story credit, and I can see his influence on the film, though it is also clearly an Oliver Stone film. It is good, but I won't watch it again.
Posted by Julia Mac at 15:50