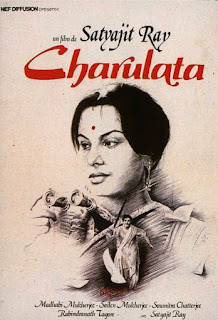 Most of the Indian films I have seen are Bollywood-style films: melodramatic, musical, with lots of bright colours and gorgeous costumes. This is almost the opposite to Ray's film Charulata, with its quiet story of unspoken feelings that create painful changes in a small family unit. This is the first of Ray's films I have seen, and if they are all like Charulata, I am going to have another director to add to my list of favourites.

In the late 19th century, Charu lives with her husband Bhupati, who runs a newspaper dealing with politics. The marriage is friendly, but not close, and Charu is bored with little to do around the house. Bhupati's cousin Amal comes to stay, and Bhupati asks him to encourage Charu's interest in writing. Tender feelings start to bloom between Charu and Amal, though neither dares speak it aloud.

This is such a lovely film that deals with a small situation yet shows the devastating effects small breaches of trust can have on relationships. The black-and-white cinematography, along with the at times languid but interested position of the camera reminded me of Ozu's films, and the effect as a whole makes us focus on the faces and movements of our characters. The looks and gestures Charu, Amal and Bhupati give one another speak volumes. All the actors are wonderful, particular Madhabi Mukherjee as Charu, who has one of those faces that the camera loves.

It is always good to be reminded that a country's cinema is not made-up entirely of one kind of film. I do love the Bollywood musicals, but I also love this quieter, more character-driven style of storytelling. Both, when done well, are wonderful.
Posted by Julia Mac at 16:00