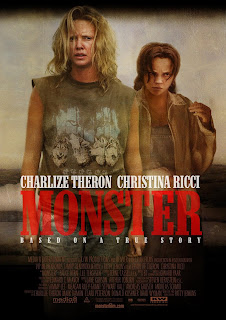 There are several clever decisions Jenkins made with her film about real-life serial killer Aileen Wuornos. There had already been two documentaries (one that came out the same year) about Wuornos made by Nick Broomfield which laid out the facts of the case and showed footage of Wuornos in court describing her life as a prostitute, as well as several interviews with her in gaol. Jenkins' film takes a more "inspired-by" approach, fictionalising parts of the story, and only focusing on Wuornos' life before she was caught. This allows us to get to know Aileen as a person, and her relationship with her girlfriend, and the circumstances of those murders.

Charlize Theron won heaps of awards for her performance, and deservedly so. Having watched Broomfield's films, I knew what the real Aileen was like, and Theron not only does a perfect impression of her, but also opens up her character as we see her personal life. Along with Sissy Spacek as Loretta Lynn and Natalie Portman as Jackie Kennedy, Theron's performance is one of the best portrayals of a real person I have seen.

Christina Ricci is also great as Selby Wall, a fictional version of Wuornos' real girlfriend Tyria Moore. Ricci's role is less magnetic than Theron's, but she makes Selby an interesting and complex character. She is looking for love, trying to find a place for herself as a lesbian in small town America, and for a time ignores the horrible crimes Aileen commits, even benefiting from them. Their relationship is very complicated but never feels artificially so.

I am glad that a woman directed this film, and wrote it too. While many a male director would have done a fine job, Jenkins treatment of the whole, particular the lesbian relationship at the story's heart, is not sensational. The gaze of the audience isn't directed to say 'Oh, look, two woman in bed together,' but 'Gee, having an non-hetero sexuality is not easy.' Also, it doesn't simply say "Wow, a woman who is a serial killer, that's rare', but instead explores the way Wuornos' gender leads to her killing clients.

The film gets remembered for Theron's performance, and it should, but it should also be remembered for how its story draws out the relationship between Aileen and Selby.
Posted by Julia Mac at 15:37