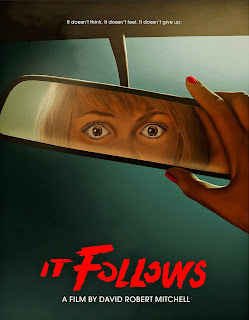 It Follows is a slow-burn horror story with a very clever conceit: after having sex, a person suddenly starts being followed by ghostly apparitions, which only they can see. After an assignation with her new boyfriend, Jay Height finds herself in this situation, having caught the sexually transmitted hauntings, and must make the decision whether to pass it on and get rid of it, or try to end it with her.

Mitchell has filmed his story in a quiet way, with unobtrusive editing (it doesn't cut every split second), and uses Steadicam shots that revolve around a scene until landing on the characters. It is dispassionate but not uninterested. It ups the creepiness and seriousness of the hauntings, as it takes a while for us, and Jay, to see the person following her; and we become suspicious of anyone walking behind the characters.

While a lot of teenagers in horror films are stupid and/or annoying, Jay, her sister and her group of friends are portrayed as intelligent, and supportive of one another. Mitchell even includes some sexual tension between the group which doesn't necessarily lead anywhere, but feels realistic. The tone of the film is quite sincere, there are few jokes or light moments, but it maintains the oppressive fear throughout.

I was really impressed by the film. It has its own distinct style, and enjoys the ambiguity of its story, not giving the audience complete closure with its ending. It resembles Robert Eggers The Witch, with its slow-burn approach that heightens the horror of its story.
Posted by Julia Mac at 04:15