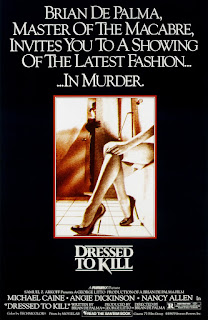 One could be rude and say that Dressed to Kill is for people who thought there wasn't enough sex and blood (or shower scenes) in Alfred Hitchcock's Psycho. For Dressed to Kill is very much a retelling of Psycho (thought not a shot-for-shot remake). However, saying that would be wrong, as De Palma's film is really a clever and highly entertaining variation on a theme of the famous film. It is Hitchcockian, but also entirely De Palma's own movie.

As in Psycho, the first part of De Palma's film follows a woman, Kate Miller, as she works through a morally dubious situation she has got herself into. In Dressed to Kill, Kate's dilemma is about having an affair, as her husband is not satisfying her needs. She tries her attractions on her therapist Dr Robert Elliot, but he turns her down, so she ends up going home with a stranger she finds in an art gallery. This part of the story is essentially a red herring for the audience, as we believe we are going to see the results of this affair. And then something unexpected, and seemingly unrelated happens: Kate is brutally attacked by a blonde woman in a black trench coat. Just before she dies a young woman, Liz Blake, sees her dying in the lift, and also spots the assailant. So she is next!

De Palma often receives criticism for his portrayal of woman, specifically the way they are sexualised while being mutilated or murdered. I think that criticism is warranted, but his female characters in Dressed to Kill aren't nearly as poorly drawn as many woman in films are. Kate may border on being a stereotypical 'nymphomaniac,' but she has a friendly and close relationship with her son and is a good mother. Liz is a prostitute but is clever, possessing both intelligence and street-smarts. She doesn't sit back and let herself become the next victim, nor relies on the police (in fact, they use her to find information).

There are lots of great scenes in the film, one being the gallery scene where Kate looks for a suitable lover for the afternoon. The whole scene, done without dialogue, is masterful, everything conveyed with glances and gestures and a good old-fashioned glove drop. De Palma uses some old film techniques, like split screens when characters' remember something; and the bright colours of the film are reminiscent of Hitchcock's Technicolor thrillers.

This was hugely enjoyable, the only real negative being the old-fashioned approach to transgender people. The ending is also a bit of a cliche, but I felt that it played to its classic Hollywood approach to the story. This is how you "remake" a film (if you really have to).
Posted by Julia Mac at 15:11