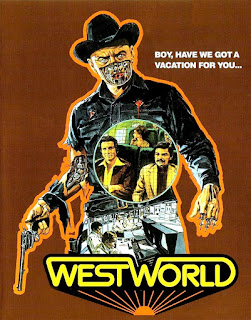 Science-fiction and Westerns genre mash-ups often make curious films. Science-fiction is usually focused on the future and technologies interacting with humans; Westerns almost invariably look to the past, and humans in a more primitive mode of survival. Westworld marries the two genres together in a really clever way, exploring these ideas around technology and survival.

The Westworld of the title refers to one of three themed worlds featured at the theme park Delos; the other two are Medievalworld and Romanworld. Each world gives he guests are immersive experience in either the American Old West, Europe in the Middle Ages or Roman Empire life (the last two are the experiences of the elite, naturally). Two guests to Westworld, Peter and his friend John (who is on a repeat visit) enjoy the life of a cowboy in the Old West, even having a duel with a cold-blooded gunslinger, played by a brilliant Yul Brynner. However, malfunctions starts happening, making the androids' "do not kill" function stop working. Guests start getting killed, and Martin finds himself being pursued by Brynner's vengeful Gunslinger.

So much about this movie works really well. The concept for a start is extremely good, and very fertile ground for storytelling: no wonder it has been turned into a TV series several times. The character of the Gunslinger clearly inspired the Terminator, with its relentless pursuit of its intended victim. The film was also rather predictive with its analogy of the systems malfunction to a virus. To modern minds this sounds obvious, but many in the 70s would have found it new, and no doubt frightening.

This is a very clever and thought-provoking film, one I am surprised Hollywood hasn't remade as a film (the TV series likely stopped that from happening). Its ideas are ones we are still grappling with, and it is potentially for horrifying for us as robots become more and more common in everyday life.
Posted by Julia Mac at 04:31