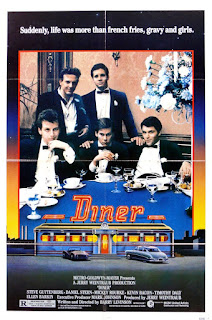 Diner is one of those films about a group of people at a particular time of their lives, where subtle but monumental shifts are occurring. Here five guys are on the cusp of adulthood, though a few seem to have already taken the plunge and are now wondering if they lept too soon. Over the last week of the 50s, the group reconnects and tries to figure out what their futures will look like.

There is a bit of plot in the film, but this is really about the characters and their relationships to one another. The cast is made up of Steve Guttenberg, Tim Daly, the always recognisable Daniel Stern, Mickey Rourke, and unavoidable Kevin Bacon. They have great chemistry with one another as they reminisce about their high school days together at the titular diner. There are a few female characters too, most notably Stern's "Shrevie's" wife Beth, but the focus is mostly on the guys.

Diner is a good blend of comedy and drama, and nicely evokes the late 1950s without overdoing the period aesthetics: perhaps because many people still remembered those days Levinson felt it would have been overkill. This gives the film a timeless quality, that the concerns of these young men play out in each generation. The only difference between theirs and ours (or mine at least) is that the signifiers of  adulthood are nowdays put off longer (I can't imagine being married at 19!).