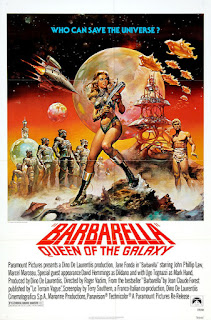 The chauvinism and sexism of Vadim's films is hard to stomach at times. I have seen a few of his movies now, and can't say I want to see anymore. Barbarella at least has some camp value, though the troubled production means that the film loses focus and all sense rather early on.

In a very distant future Jane Fonda's Barbarella, who is some sort of interplanetary special agent, is tasked with finding Dr Duran Duran, a scientist whose invention - a positronic ray - could be dangerous for Earth if one of the other planets get hold of it. So Barbarella goes looking for it, crash-landing on a planet supposedly more primitive than Earth (they have sex the "old-fashioned way"). Eventually she meets an angel, goes to Sogo where Dr Duran was last seen, and then ... things happen. Really, there is not point worrying about the plot of the film: the filmmakers started filming before they had even finished the script. This doesn't always spell disaster for a movie (Casablanca is a good example), but here it shows badly.

While the film is not great, it is campy enough to be vaguely enjoyable. The costumes are pretty eye-popping, and clearly inspired Paul Gaultier's costumes in The Fifth Element. The sets are also remarkable, especially Barbarella's spaceship, with its furry, carpeted walls. So 60s! Fonda is very good as Barbarella, and while the script subjects the character to several exploitative scenarios, she does get moments of comedy, and Fonda makes the most of them.

I am glad to have crossed a cult classic off my list, but feel that were I male, I may have got more out of this. As it is, I was impressed with Fonda's dedication to the role, the look of the film as a whole, and even some of the scenes are hilarious, like the demonstration of exaltation-transference pills (how future earthling have sex). But the sexism and cobbled together nature of the story and script are too big to ignore.