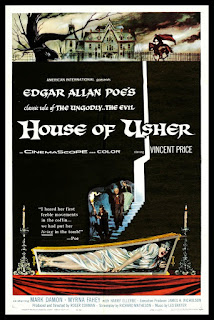 I love a good Gothic horror film, and if it has Vincent Price in it I am bound to like it even more. Based on Poe's novella The Fall of the House of Usher, the story follows Philip Winthrop who comes to the House of Usher to see his fiancee Madeline. He meets her brother Roderick who tries very hard to dissuade Philip from marrying Madeline, arguing that the Usher family is cursed with madness, and that only will it stop with his and Madeline's deaths.

I really enjoyed this film. Vincent Price is a magnetic screen presence, and his Roderick is a wonderfully tortured soul. He belief that he and his sister will go mad is presented as tragic, but he is so determined that it will happen, and cannot accept giving Madeline a chance at happiness, that you wonder if the other Ushers simply drove each other mad.

In terms of pace and gore, this film is dated. A modern audience would get impatient with the time it takes to get crazy, and the blood is tame. However, the motivations underlying Roderick's behaviour are pretty awful, and if the story were remade today I'd imagine more emphasis would be placed on Madeline's character. I enjoyed the film, having a soft spot for cult horror classics.

Corman adapted many Poe stories, and if this anything to go by, I shall enjoy watching them. They are fun, and if a horror film doesn't shock or scare you, it is better that it amuse you than bore you.
Posted by Julia Mac at 16:38