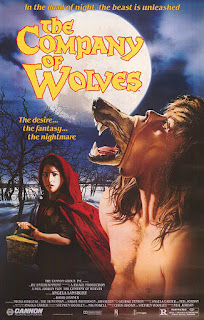 One must go into Jordan's film not expecting a typical Three-Act story structure. Instead, like the fairytales it is retelling, the film has stories within stories all based around the film's theme: beware of charming strangers.

Rosaleen, in modern day Britain, dreams she lives in the forest in a fantastical past. Her sister has recently been killed by wolves, and Rosaleen's grandmother tells her stories about dubious men with monobrows who turn out to be werewolves, including a man who disappeared on his wedding night, only to come back years later to visit his ex-wife. All this leads up to the Little Red Riding Hood story, as Rosaleen one day meets a hunter in the woods (one with a monobrow).

The special effects, particularly the wolf transformations, are on a par with those in An American Werewolf in London. They are gruesome and startling, and really well done. Sarah Patterson is great as Rosaleen; she reminded me of Helena Bonham Carter. Angela Lansbury is, as you would expect, wonderful as Rosaleen's grandmother: and she gets a rather spectacular end too!

The Company of Wolves is a fun and clever curiosity of a film. I do like my fairytales, and also Gothic horror films, and this brought the two together nicely. Its low-budget aesthetic also adds to its charms.
Posted by Julia Mac at 01:09