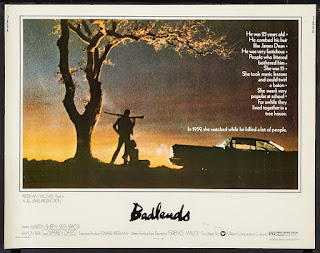 I am rather ambivalent about Malick's films, which slightly baffles me as I don't object to spirituality in films. Even more strangely, I am one of those who found Tree of Life to be a marvellous piece of cinema (dinosaurs and all). But some of his others have left me a bit, eh. Don't get me wrong, his films are absolutely beautiful to look at, and there is a lovely dreaminess to them, but I just don't get swept up in them.

Badlands was Malick's debut, and it is a very impressive one. The road trip film follows teenager Holly and her boyfriend Kit as they move around the Midwest of America, leaving a trail of destruction in their wake. Holly narrates the film, starting off rather enamoured of bad-boy Kit who seems to promise a life of excitement. Throughout their adventures Holly starts to see Kit's behaviour in a new light as the romance wears thin.

Sissy Spacek and Martin Sheen are fantastic as Holly and Kit. Their growing attraction and eventual separation feels natural. This is a particularly poignant scene where Sheen's Kit tries to reignite their romance by dancing in the car's headlights to 'A Blossom Fell.' Holly's dissatisfaction is clearly written on her face, hidden from Kit as he gently sways her from side to side. The music in the film is also great, from the music the two listen to, to the Carl Orff score. The cinematography, as you would expect, is gorgeous, from the sweeping expanses of the Montana badlands, to the romantic lights peeping out of the night sky.

Writing this review has made me appreciate the film a lot more. Malick gets great performances from his two leads, and his story is anti-romantic in a way; Holly's projection of James Dean onto Kit is punctured by the reality of actually living with a bad-boy. The violence and killings are a shock but they don't break the tone of the film, as though it, like Holly, is unable to fully comprehend what anger resides in Kit. I can see echoes of Badlands in Andrea Arnold's American Honey which simiarly takes a dreamy, poetic approach to teenage disaffection.
Posted by Julia Mac at 04:39