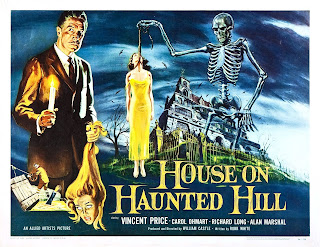 House on Haunted Hill has everything you would want from a horror B-movie. It is set in a strange, gothic mansion, there are skeletons, ghosts, secrets, hysterical screams, a pool of acid in the basement, and best of all, Vincent Price!

The story's set-up is that Price's Frederick Loren has invited a group of people, all in need of money in some way, to stay the night at the supposedly haunted mansion. If they make it through the night, they will get $10, 000. One of the guests is actually the owner of the building, Watson Pritchard, and he is terrified of staying, saying that ghosts haunt the house. The other guests are a psychiatrist, a pilot, a columnist, one of Loren's employees, and his wife Annabelle (the gathering is ostensibly a party for her. Some party.).Of course things start to go bump in the night, and when Loren's wife is found hanging dead from the rafters, things get really exciting.

This film is hoot! While not scream-inducing by today's horror standards, it does have a rather sinister ending. Overall it is pure camp, something I generally enjoy. Vincent Price is also a great screen presence, particularly with that voice of his. Few people project such an aura of malevolence as he does.

This is a great cult classic that is a huge heap of fun. It is short and sweet in its running time, and it won't leave you feeling bored. Its influence on Tim Burton's films and many episodes of The Simpsons are obvious, and only adds to the enjoyment.
Posted by Julia Mac at 15:41