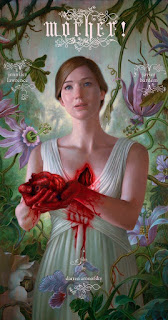 Every review you read about mother! is going to say 'This film will divide audiences' or 'This film is not for everyone.' And it is true. Aronofsky has created something that hard to explain and makes no apologies for its allusions and themes. You will come out of the film feeling something, be it stunned, angry or confused (or all three).

I don't want to say much about the film, as it is one that benefits going in as cold as possible. Mother (Jennifer Lawrence) lives with her poet husband Him (Javier Bardem) in a house in the country. She is fixing it up while he tries to write. One day Man (Ed Harris) arrives and stays, much to Mother's chagrin. Then his wife (Michelle Pfieffer) turns up, and things start to get weirder and weirder.

There is a clear allegory in the film, though I only pieced parts together hours after seeing it. You could read it through a feminist lens, with an environmental view, or even with a Biblical eye. Lawrence is wonderful as Mother. The whole film rests on her performance, and a good portion of it is close-ups of her face as she reacts to the chaos ensuing around her. She keeps us anchored as the film's dream logic takes us to extremes.

I really liked this, but know others won't. As I was leaving the cinema, the woman in front of me was telling the usher it was a 'shocker' (Australian for "shockingly terrible"). Like with many films I have seen, I don't know anyone in my immediate acquaintance I'd recommend this to, but am looking forward to seeing it again and noticing new things about it.
Posted by Julia Mac at 05:13